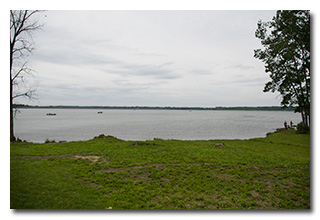 Eric and Miles arrived at Alum Creek State Park's Africa Road boat ramp area at 1356 UTC. After exploring the area for few minutes, the duo elected to set up the station in a quiet cul-de-sac away from the traffic of pick-up trucks and boat trailers. Eric chose to test his newly-built drive-on mast support (photo) and his recently-acquired Jackite 31' telescoping fiberglass pole. The drive-on mast support worked well but in deploying the Jackite pole, Eric found that the mast sections needed more aggressive pull-and-twist than he is used to applying with the aging MFJ-1910 33' fiberglass mast he has been using since 2016 and the top elements collapsed once before Eric got it right. Once the Jackite was up, it worked very well. Eric deployed his usual 28½' end-fed wire vertical with three 17' radials on the Jackite pole and deployed his Elecraft KX3 on his folding camping chair's swing-up table. Because Eric wasn't sure his usual NiMH battery packs would survive five activations, Eric chose to power his KX3 at this first park using a 5Ah SLA battery. Eric was on the air by 1411 UTC.

Band conditions on 40, 30, and 20m were excellent and in just about forty minutes Eric easily made twenty QSOs, twice the number of QSOs required for a valide POTA activation.

Starting on 40m, Eric began calling "CQ POTA" and was rewarded at 1415 UTC with a reply from WB9OWN. QSOs on 40m came quickly after that with Eric's eighth QSO, with W4AVP, coming ten minutes later at 1425 UTC.

Eric and Miles tore down the station and took a few minutes to photograph the view of the reservoir before hitting the road for the second of five parks, Delaware State Park, K-1946, where they were to be joined by friend and fellow SEORAT-member Mike Hansgen, K8RAT.