Located in Ohio's Bluegrass region, one of the state's most scenic and biologically interesting areas, Adams Lake State Park has much to offer the nature enthusiast. Remnant prairies and a quiet lake can be enjoyed in this small (50-acre) unique park.

On Sunday, June 30, 2019, two members of the Southeast Ohio Radio Adventure Team performed a successful activation of Adams Lake State Park in Ohio as part of the Parks on the Air (POTA; link) program. Eric McFadden, WD8RIF, and Miles McFadden, KD8KNC, visited the park on a hot, humid afternoon accompanied by Vickie McFadden, KC8MAJ, and the family's two small dogs, Theo and Mindy, while on their way home to southeastern Ohio following time spent in Kentucky for the annual McFadden Family Reunion.

The quintet arrived at Adams Lake State Park at about 2130 UTC and drove the length of Park Road 1 to scount a location to deploy. Settling on a well-shaded picnic area near the Post Oak Trail trailhead, Eric and Miles quickly deployed the 28½' end-fed vertical supported on an MFJ-1910 33' fiberglass mast and set up the KX3 on the shaded picnic table. Eric was on the air by 2155 UTC.

Eric's good friend and POTA-Hunter K8RAT had reported that band conditions had been poor the whole day and that POTA Activators had had to work hard to validate their activations. This news, combined with the memory of the recent very challenging activation at Mohican State Park (link) and the late start-time, caused Eric to be concerned that he might have difficulty making his required ten QSOs before the end of the UTC day just two hours away. However, even though band conditions weren't great and the POTA Spotting system wasn't properly skimming Eric's RBN spots, Eric needn't have been worried. 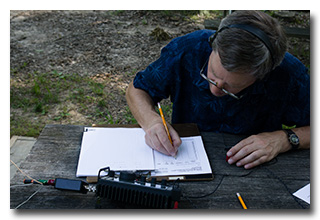 While Miles spotted Eric to the POTA Spots website (link), Eric began operations on 40m. His first QSO came at 2158 UTC with VE3FLN. QSOs on 40m came steadily, if not quickly, with Eric's tenth QSO on 40m coming at 2235 UTC with N8NK. Switching to 80m at 2233 UTC, Eric made a QSO with the aforementioned friend and POTA-Hunder K8RAT at 2235 UTC. Eric was pleased to have validated his activation is just about thirty minutes.

With eleven QSOs in the log and the prospect of at least two hours yet to go before arrival at home, Eric announced he was going QRT and he and Miles took down and packed up the station.

Previous mention was made of problems with the POTA Spotting system. While both Miles and K8RAT were able to spot Eric to the POTA Spots web page (link), Eric's CQ calls, which were reliably picked up by the Reverse Beacon Network (link), were not skimmed from RBN by the POTA Spots websites as they should have been. It's unclear why these automatic spots weren't working for Eric but, thanks to help by Miles and K8RAT, Eric got spotted enough times to successfully validate his activation.

With one exception, Adams Lake appears to be a beautiful and peaceful state park that bears additional visits. The single exception mentioned in the previous sentence is that waterfowl hunting is permitted in the far-eastern end of the park. The first shotgun blast that occurred while Eric and Miles were setting up the station was startling enough to the humans but it was terrifying to little Theo-dog, who had been busily exploring all the new smells to be found in the park about 50 yards away when the shot was heard, and the blast caused him to tear back at full speed to the safety of the van. A second shotgun blast occurred while Theo was hiding in the van but, fortunately, no additional shots were heard. Miles was able to eventually coax Theo out of the van but the scared little dog stayed under Eric's picnic table for the rest of the activation.

All Eric's QSOs were CW and were made at the 5-watt level. Miles didn't operate but did all of the expedition photography, took care of the dogs, helped with set-up and tear-down, and helped with navigation.