Adams Lake State Park lies in an area rich in natural diversity with many unique plants and animals. Wedged between the foothills of the Appalachian Mountains to the east and the glaciated land to the north and west, no other area of Ohio boasts a richer abundance of plant species.

Known as the Bluegrass Region of Ohio, Adams County harbors scattered pockets of prairie communities, a remnant of the past when the great western prairies reached into Ohio. Sometime after the last glacial advance, the climate turned warmer and drier. It was during such periods that the prairie advanced eastward into Ohio. Purple coneflower, little blue stem and prairie dock provide an impressive display during the peak blooming season of mid-summer.

The glaciers that covered most of Ohio did not reach Adams County, but their effect is still evident. As the glaciers advanced and the climate changed, many northern species of plants expanded their range southward and remained after the glaciers retreated. White cedar and maidenhair fern represent two such northern transplants.

Before the glaciers advanced, a great river called the Teays flowed through Ohio. As the glaciers moved forward, they had a profound effect on the drainage system by blocking existing rivers. The ancient Teays River was blocked and its waters were backed up forming the Ohio River. The Teays River transported plants native to more southern conditions to Adams County. Mountain laurel is one such traveler still found in the area.

Once teeming with elk, buffalo and bear, the region now hosts numerous songbirds as well as white-tailed deer, turkey, gray squirrel and other mammals.

This globally rare, sparsely vegetated, dry prairie is situated on a highly eroded slope of Estill Shale surrounded by a second-growth oak-hickory woodland. Access is from Adams Lake State Park.

There are Allegheny mound ant colonies and a population of the uncommon Edward’s hairstreak butterfly. 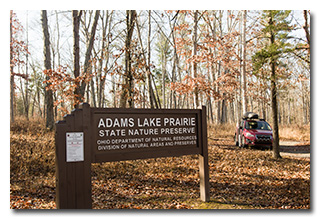 Eric McFadden, WD8RIF, and Miles McFadden, KD8KNC, were driving from their home in southeastern Ohio to a large McFadden family gathering in Versailles, Kentucky, when they stopped to perform the two-fer activation. They were accompanied by Eric's daughter (and Miles's sister) Kate, KD8KNB, and her five-month-old son Archer, who is not yet licensed.

Adams Lake State Park and Adams Lake Prairie State Nature Preserve lie directly on the route from Athens to Versailles, and the quartet arrived at the State Nature Preserve parking area at about 1500 UTC. While Kate carried Archer and explored Adams Lake, Eric and Miles quickly deployed a 28½' wire vertical on a 31' Jackite telescoping mast supported on a drive-on base. Eric placed his Elecraft KX3 in Miles's Impreza's open glovebox and was on the air at 1518 UTC. 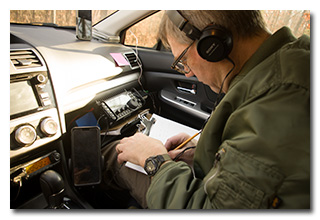 Eric began his operation on 20m by finding a frequency clear of CQ World Wide DX Contest CW activity, spotting himself to POTA Spots, and calling "CQ". Eric's first QSO came at 1518 UTC with K5PE in Texas. QSOs came quickly on 20m, with Eric's eleventh QSO coming at 1532 UTC with KG5WJZ in Kansas. This run included a P2P QSO with AE5X who was activating Garret Mountain Reservation State Park (K-6462) in New Jersey, a QSO with KP4M in Puerto Rico, and QSOs with operators located in Texas (3), Florida (2), New Jersey, Minnesota (2), Idaho, and Kansas.

Switching to 40m, Eric found himself a frequency clear of contest activity, began calling "CQ", and updated his spot on POTA Spots. Eric's first QSO in this run came at 1537 UTC with AF8E in Ohio. QSOs came quickly, with Eric's tenth QSO on 40m coming at 1546 UTC with W4KIK in Ohio. This run included QSOs with operators located in Ohio (3), North Carolina (3), New York, Tennessee, Michigan, and Virginia.

Because of the need to continue south to Versailles for the family gathering, Eric chose to end his activation at this point and he and Miles tore down the station and re-packed the car.

In all, Eric made twenty-one QSOs, including one P2P QSO. All of Eric's QSOs were CW and were made at five watts output.