Located in central Ohio near Circleville, the rolling woodlands and quiet waters of A.W. Marion State Park offer visitors a welcome escape from the rigors of everyday life. This small (309 acres) but unique park offers a variety of recreational activities while maintaining a quiet atmosphere of natural serenity.

Due largely to the fertile soils of the Pickaway Plains, which are said to contain the richest land in Ohio, early inhabitants were attracted to the area long before A.W. Marion was established as a park. The Adena Native Americans were among the first to settle the area 2,000 years ago.

An ancient circular earthworks on the site of what is now the city of Circleville (hence the name) gave evidence to their presence. In more recent times the villages of Chief Cornstalk of the Shawnee nation were located on these plains. These same villages were the object of attention of Lord Dunmore, Governor of Virginia, who in 1774 marched his army within striking distance. His intention was to destroy the villages and end the uprising that had resulted in the Battle of Point Pleasant days earlier. A peace settlement was agreed upon before any more fighting occurred.

In 1948, construction began on the dam for Hargus Creek Lake. By 1950, the area became part of the newly created Division of Parks and Recreation. In 1962, the park was renamed the A.W. Marion State Park in honor of the first director of the Department of Natural Resources, a Pickaway County native. 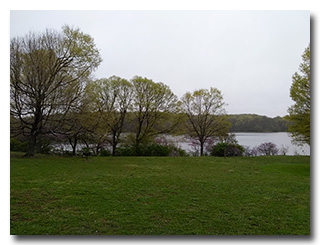 One member of the Southeast Ohio Radio Adventure Team succeeded in performing a valid activation of A.W. Marion State Park, K-1931, in Ohio as part of the the Parks on the Air (POTA; link) program. Eric McFadden, WD8RIF, visited A.W. Marion State Park with his wife Victoria and their two dogs, Mindy and Theo, on a cool and wet spring day.

Eric, his wife, and their wee dogs arrived at A.W. Marion at about 1500 UTC and Eric quickly erected his MFJ-1910 33' fiberglass mast and deployed his ½-size W3EDP as an inverted-L. When Eric tested this antenna, however, the best match the his KX3's internal KXAT3 autotuner could provide on 20m was 2:1 and on 40m it was over 3:1 and on 80m it was 8:1. Was the problem the wet 300Ω TV-twinlead? A faulty 4:1 unun? Who knows, and Eric didn't feel like diagnosing the problem in rain, so he dropped the inverted-L and quickly deployed his 28½' wire vertical with three radials which the KXAT3 easily matched on all bands of interest. Because of the cool temperature and rain, Eric chose to operate from within his car. Eric was on the air by 1539 UTC. 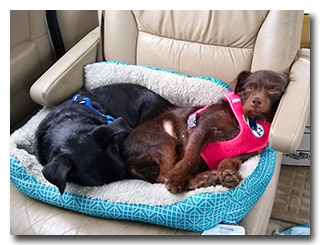 Eric started operations on 20m and his first QSO was with ON4VT in Belgium—a sign band conditions were good—at 1543 UTC. Eric made three more QSOs on 20m over the next fifteen minutes. Eric changed to 40m and made his first QSO there with KE9AJ at 1601 UTC. Fifteen minutes of calling CQ netted another six QSOs. On 30m, Eric's first QSO was with W1WBB, who had earlier worked Eric on 40m, at 1621 UTC. A second QSO on 30m came three minutes later. Trying something Eric had never done before, Eric verified that his KXAT3 could easily match the wire vertical on 60m, began calling CQ on 5.3585MHz, and was rewarded with a prompt answer by VE3LDT at 1630 UTC. (This was Eric's 1st-ever 60m QSO.) Eric had hoped to be able to work his good friend K8RAT on 60m but this wasn't to be, and no QSO was made with K8RAT on 80m, either, where Eric's KXAT3 was able to eke out a 2:1 match on the short-for-80m vertical. (Eric had hoped that the ½-size W3EDP configred as an inverted-L would have been useful as a NVIS antenna on 80m, but this is an experiment which will have be tried again at a later date.)

The rain kept Eric and wife from exploring the small park but what they see of the park indicated a return trip during nicer weather is in order.