In the early 1900s the islands were accessible only by boat. It was said that only lovers made the effort to get to this romantic island, thus the name Lovers Key. A road to the island was built in 1965. Local legend hints that Black Island got its name from Black Augustus, a pirate who had been captured by authorities, and later escaped, making this island his home for the remainder of his life. Fish camps were located on Black Island from the early 1900s until the late 1950s.

In the 1960s and 1970s, the four barrier islands were slated for development. Preparations for development damaged the islands. Mangrove swamps were altered to uplands by dredging a canal through Black Island. 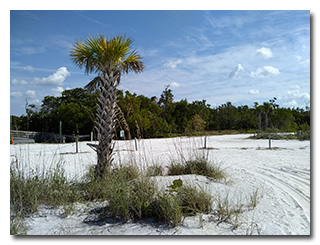 One member of the Southeast Ohio Radio Adventure Team succeeded in performing a second valid activation on November 19, 2018 of Lovers Key State Park, K-1900, in Florida as part of the the Parks on the Air (POTA; link) program. Eric McFadden, WD8RIF, visited the park on a lovely weekday morning and was accompanied by his wife Vickie, KC8MAJ, who spent the time on the beach enjoying the sun and hunting for seashells during the activation.

The pair arrived at the park about 1430 UTC and took the tram to the beach on Lovers Key Island. Eric chose to again set up his station in the beach's gazebo in order to avoid sitting in too much direct Florida Sun. Eric's station consisted of his Enhanced KX3 Travel Kit and a 42' W3EDP-Jr end-fed zepp supported between the gazebo and a Black Widow 20' telescoping pole, the W3EDP-Jr being fed through a homebrew 4:1 unun (link). The sand beneath the top couple of inches of loose sand was as hard as concrete, far too hard to accept either of Eric's support spikes, but Eric was able to bungie-cord his Black Widow to a conveniently-located post. Eric was on the air by 1459 UTC.

Eric began operations on 20m and, because the park provides free wifi at the beach, was able to self-spot himself. Conditions on 20m were excellent, the W3EDP-Jr performed extremely well, and Eric made thirteen QSOs in twenty-nine minutes, including a park-to-park QSO with N2CX who was performing an activation of Redden State Forest, K-4610, in Delaware. Eric switched to 40m and made four QSOs there in about thirteen minutes. Eric switched to 30m and made one QSO there before returning to 20m to work N2CX at K-4610 on a second band.

Eric had hoped to see and photograph the ospreys he had seen during his earlier visit but the birds were hiding in the trees or busy flying at altitude during this visit.

Eric also submitted his log to the World Wide Flora and Fauna in Amateur Radio (WWFF; link) program although his nineteen QSOs were not sufficient to achieve a valid activation within the program which requires 44 QSOs be made.