Some of Florida's rarest and most imperiled plant and animal species, including the Florida scrub-jay, Florida scrub lizard, Florida mouse, gopher tortoise and the Eastern indigo snake are found here. Ospreys and bald eagles are frequently sighted along the three miles of lakefront, and white-tailed deer, bobcat and black bear are occasionally seen. Acreage consists primarily of scrub, scrubby flatwoods and bayhead. This relatively new park is best suited for those seeking a remote wilderness experience, bird watching and nature study. 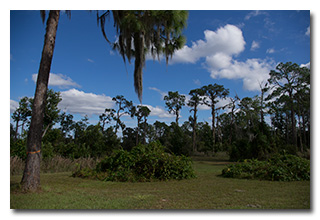 One member of the Southeast Ohio Radio Adventure Team succeeded in performing a valid activation on November 15, 2018 of Lake June-in-Winter Scrub State Park, K-1891, in Florida as part of the the Parks on the Air (POTA; link) program. Eric McFadden, WD8RIF, visited the park on weekday afternoon while traveling from Florida's Gulf to the Space Coast.

Eric arrived at the park at 1835 UTC and chose to set up his station in a covered picnic shelter in order to avoid sitting in too much direct Florida Sun. Eric initially deployed his N2CX-inspired 20/30/40m vertical but after finding high SWR on both 20m and 40m, he switched to his proven 28½' end-fed wire. Eric's station consisted of his Enhanced KX3 Travel Kit and his 28½' end-fed wire supported as an inverted-L on a Black Widow 20' telescoping pole and fed through an Elecraft 4:1 balun. Eric found that his experimental, short, airline-friendly, spike was insufficiently long to support the Black Widow mast in the light, sandy soil near the picnic shelter and he instead used his regular, longer spike to support the mast. Eric was on the air by 1902 UTC.

Eric began operations on 20m and thanks to spotting-support by fellow SEORAT-member K8RAT, he managed ten QSOs in just about thirty minutes. Due to concern about rapidly approaching storm clouds and increasing wind speeds, Eric chose not to attempt any QSOs on 40m but to tear down his station before the arrival of a storm.

Eric also submitted his log to the World Wide Flora and Fauna in Amateur Radio (WWFF; link) program although his ten QSOs were not sufficient to achieve a valid activation within the program which requires 44 QSOs be made.