Separated from the mainland by Charlotte Harbor and Pine Island Sound, this island is part of a chain of Gulf Coast barrier islands.

The centerpiece of Gasparilla is the restored Port Boca Grande Lighthouse built in 1890. Swimming, snorkeling, fishing, and nature study are popular activities which can be accessed at any of our five parking lots. Shelling is particularly good in the winter months along the Gulf. Two picnic areas (located at the Range Light and the Boca Grande Lighthouse parking lots) offer pavilions for shade and scenic views of the surrounding water.

Fishing has always been an important part of Gasparilla Island's cultural history. The Calusa tribe likely fished area waters for a living.

In the 1700s, Spanish fishermen arrived and established camps along the shore where fish were shipped to Cuba. In the 1800s, American settlers were attracted to Charlotte Harbor by its rich bounty of sea life.

By the 1900s, Gasparilla Island was seasonal host to many prominent sport anglers who fished for tarpon in Boca Grande Pass which became known as the Tarpon Capital of the World.

The oldest structure on the island and one of the oldest in Lee County is the Port Boca Grande Lighthouse, built in 1890 and operated by the U.S. Coast Guard until 1966. After 20 years of abandonment, and a major renovation, the lighthouse was rededicated in 1986 and is listed on the National Register of Historic Places. The state assumed ownership of the property opening it to the public as a state park in 1983. 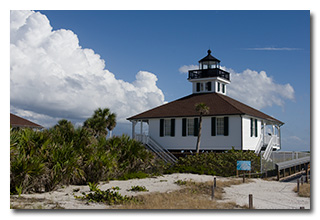 One member of the Southeast Ohio Radio Adventure Team succeeded in performing a valid activation of Gasparilla Island State Park, K-1874, in Florida on November 14, 2018, as part of the the Parks on the Air (POTA; link) program. Eric McFadden, WD8RIF, visited the park on a perfect weekeday afternoon and was accompanied by his wife Vickie, KC8MAJ, who explored the beach, hunted for seashells, and helped with activation photography while Eric performed his activation.

The pair arrived at the park about 1745 UTC and drove to the very end of the island to find the historic Boca Grande Lighthouse. Eric chose to set up his station on a picnic table shaded by a palm tree in the picnic area behind the lighthouse and, because of recent trouble with the N2CX-inspited wire vertical on 40m, Eric chose to deploy his old standby antenna, a 28½' end-fed wire. Eric's station consisted of his Enhanced KX3 Travel Kit and his 28½' end-fed wire supported as an inverted-L on a Black Widow 20' telescoping pole and fed though an Elecraft 4:1 balun. Eric was on the air by 1808 UTC. 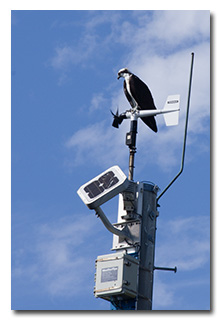 Eric started operating on 20m and, thanks to spotting support by fellow SEORAT-member K8RAT, managed seven QSOs in fifteen minutes, with his first QSO being with his dad, W8EOG, who is once again back on HF after a long period of inactivity. Eric switched to 40m but was only able to eak out two QSOs there over about twenty minutes. Returning to 20m, Eric made his final QSOs with participants of the CW Ops "CWT" event in a hunt-and-pounce fashion. Eric completed his activation with eleven QSOs.

Eric was pleased to make QSOs with his father W8EOG; his good friend K8RAT; and with fellow POTA participants N4EX and N8XX.

During set-up, Eric was surprised to see a young iguana. During the actual operation, Eric watched a pair of ospreys and listened to them talk to each other over a distance of about 50 yards. After station tear-down, Eric examined the historic 1890 Boca Grande Lighthouse and the 1885 Gasparilla Island Rear Range Light.

Eric also submitted his log to the World Wide Flora and Fauna in Amateur Radio (WWFF; link) program although his eleven QSOs were not sufficient to achieve a valid activation within the program which requires 44 QSOs be made.

All of Eric's QSOs were made at the 5-watt level.