For thousands of years Native Americans lived in and around Charlotte Harbor. During the 1700s and 1800s, Spanish fisherman fished the area waters. After years of changing ownership, Don Pedro Island was sold to Cavanaugh Community Corporation in 1969. They built the pavilion and docks on the southeastern portion of the island. In 1985, the property was purchased by the state. The Don Pedro Land Base, acquired in 1999, adds about 100 acres of recreational opportunities to the park. 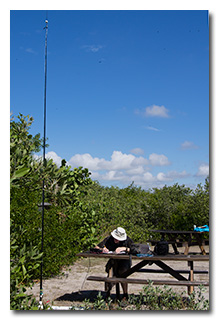 One member of the Southeast Ohio Radio Adventure Team succeeded in performing a valid activation of Don Pedro Island State Park, K-1857, in Florida on November 14, 2018, as part of the the Parks on the Air (POTA; link) program. Eric McFadden, WD8RIF, visited the park on a lovely weekday afternoon and was accompanied by his wife Vickie, KC8MAJ, who didn't operate the radio but did help with set-up and tear down and with activation photography.

The pair arrived at the park about 1530 UTC. The park offers no access to the island itself except kayak rentals so Eric chose to set up at the park landbase's kayak launch area on the intercoastal waterway. Eric was able to drive to the kayak launch area with his equipment but had to return the car to the parking lot and walk the 800' back to the kayak launch area before he could set up his station. Eric set up his station on an unsheltered picnic table, hoping to complete the activation quickly enough he wouldn't get sunburned by the direct Florida sun. Eric's station consisted of his Enhanced KX3 Travel Kit and an N2CX-inspired 20/30/40m wire vertical supported on a Black Widow 20' telescoping pole and fed through 25' of RG-58 coax; Eric deployed only three of his usual four radials due to the layout of the area. Eric was on the air by 1606 UTC.

Eric started operating on 20m and, thanks to spotting support by fellow SEORAT-member K8RAT, managed fourteen QSOs in just about half an hour while running a frequency. Eric changed to 40m to discover that, as at the activations at Koreshan State Historic Site and Lovers Key State Park, the tri-band vertical didn't provide a good SWR match on 40m and he was forced to use the KX3's internal ATU to tame the high SWR presented by the antenna. Eric's string of CQ calls netted precisely zero responses.

Eric was pleased to make QSOs with his father W8EOG; his good friend K8RAT; and with fellow POTA particpants N4EX, N8XX, and W9AV.

During his activation, Eric saw a porpoise in the intercoastal waterway, numerous pelicans, and an uncountable number of vultures flying over the water and the island.

Eric also submitted his log to the World Wide Flora and Fauna in Amateur Radio (WWFF; link) program although his fourteen QSOs were not sufficient to achieve a valid activation within the program which requires 44 QSOs be made.

All of Eric's QSOs were made at the 5-watt level.