The heritage of early West Virginia and the pioneer spirit of Watters Smith are both preserved in the homestead restoration at this 532-acre historical park. This historical park, located in Harrison County, features log cabins, period-accurate buildings and a museum that depicts pioneer life from 1796 to the early 1900s. The grounds are open to picnicking and hiking, and the park also is a popular site for birdwatching. 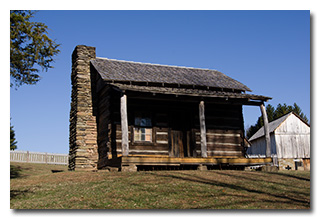 Eric, Miles, Vickie, and the dogs arrived at Watters Smith Memorial State Park on the beautiful Fall day at about 1745 UTC and made their way to the large parking lot near the park's museum. While Vickie attended to the dogs, Eric and Miles deployed the 28½' wire vertical on the 31' Jackite telescoping fiberglass mast supported on the drive-on mount and Eric set up his KX3 in the van. Eric was on the air at 1800 UTC.

There wasn't enough cell-signal to allow Eric to self-spot himself so Eric began calling CQ, hoping to be automatically spotted on the POTA Spots website via RBN.

Eric finished his operation with a total of twenty-three QSOs. All of Eric's QSOs were CW and were made at the 5-watt level.

Neither Vickie nor Miles operated but Vickie kept the dogs happy and Miles helped with set-up and tear-down of the station and did all the driving.