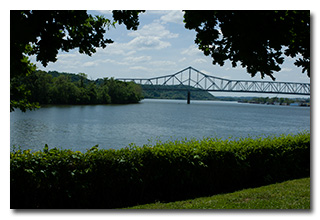 On an hot day with brilliant sunshine day, Eric McFadden, WD8RIF, performed the activation of Tu-Endie-Wei State Park on a picnic table under an oak tree in the southeast corner of the tiny state park. Eric was accompanied by the two small dogs, Mindy and Theo.

The trio arrived at the park at about 1730 UTC. After walking the two little dogs and considering places to set up his station, Eric decided to set up on the picnic table under the shade-giving oak tree. Eric deployed his 28½' wire antenna on his 33' MFJ-1910 fiberglass mast and tripod just outside of the tree's canopy. Eric was on the air at 1742 UTC. 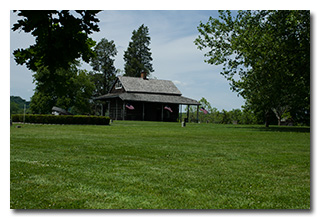 Eric began operations by looking for park-to-park (P2P) opportunities but found none at that time.

Finding his own frequency on 40m, Eric made five QSOs in about thirteen minutes. This first five QSOs demonstrated that the unexpectedly excellent short-path propagation was gone.

Pausing to check for P2P opportunities, Eric made a P2P QSO on 20m with VE9CB who was activating Connell Park Recreation Park (VE-5160) in New Brunswick, Canada.

Returning to his frequency on 40m, Eric made another ten QSOs in about fifteen minutes.

In all, Eric made sixteen QSOs and one P2P QSO. All of Eric's QSOs were CW and were made at the 5-watt level. 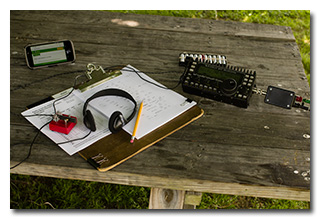 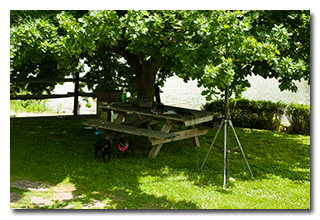