Located on four acres in Point Pleasant, West Virginia, Tu-Endie-Wei State Park is home to an 84-foot granite monument commemorating the frontiersmen who fought and died in the 1774 Battle of Point Pleasant. The monument was erected in 1909, and rests where the Kanawha and Ohio Rivers meet. The name Tu-Endie-Wei is a Wyandotte word meaning "point between two waters." 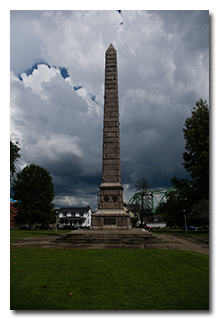 On a hot August day that threatened rain and thunderstorms, Eric McFadden, WD8RIF, performed the activation behind the 1796 Mansion House, while maintaining proper social distancing during the coronavirus (COVID-19) crisis. Eric was accompanied by his wife Vickie and their two small dogs, Theo and Mindy.

Eric, Kate, and Bo arrived at Tu-Endie-Wei State Park 1845 UTC after driving from Green Bottom Wildlife Management Area through areas of rain. At their arrival, it didn't look like rain was going to fall soon on the park and the online real-time lightning map (link) didn't show any nearby electrical storms, so Eric surveyed the small park for a place he could set up his station in the shade and deploy his mast without driving stakes. (There's no parking on the state park grounds, so operating in the car wasn't an option.)

Eric decided his best option was to set up directly behind the Mansion House and bungie-strap his mast to a solid fencepost located there. Since the museum in the Mansion House was open, Eric asked the volunteer for permission to set up and operate. The volunteer wasn't able to give permission but she was able to give Eric the telephone number of the park's ranger. Eric phoned the ranger and, once the ranger understood no permanent structures were to be installed and no damage would be done to the park or its structures, the ranger gave his permission for the operation to proceed. After notifying the volunteer of this, Eric bungie-strapped his MFJ-1910 33' telescoping fiberglass pole to the fencepost and deployed his 28½' wire vertical. He set up his KX3 on his folding camp-chair and was on the air at 1858 UTC. 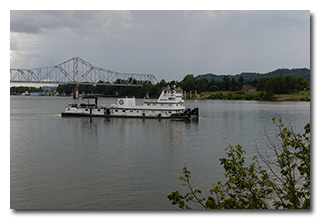 Eric was not surprised to find he had good cell-signal and could both view the POTA Spots website (link) could spot himself.

Eric watched the dogs while Vickie toured the 1796 Mansion House and began operations on 80m. His only QSO on 80m was with K8RAT at 1900 UTC.

Switching to 40m at 1903 UTC, Eric's first QSO there came at 1905 UTC with K3MRK in Pennsylvania. QSOs came quickly, with Eric's eleventh QSO on 40m coming at at 1913 UTC with WW9L. As rain had begun to fall around the time Eric was logging his ninth QSO, and had been getting stronger, Eric finished his QSO with WW9L, sent a hasty "QRT QRT WX WX de WD8RIF", detached his KX3 from the antenna and ran the KX3 and logsheets to the relative shelter of the Mansion House's rear porch. Eric's quick run of QSOs included a park-to-park (P2P) QSO with KN3A who was performing an activation of Susquehannock State Park (K-1425) in Pennsylvania.

While Eric waited for the rain to stop, he took a few minutes to tour the Mansion House while Vickie watched the dogs.

The rain had mostly stopped by the time Eric finished his tour of the Mansion House. Had he not already achieved enough QSOs to validate the activation (ten QSOs), he would have hooked the KX3 back up to the antenna and continued operating. However, with twelve QSOs in the log, Eric decided to call the activation a success and tore down the station.

In all, Eric made twelve QSOs, which included one P2P QSO. All of Eric's QSOs were CW and were made at the 5-watt level. 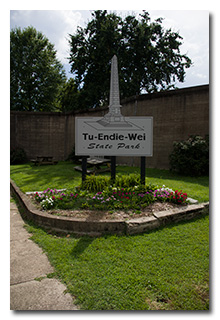 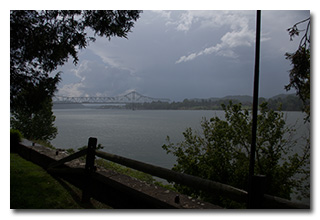 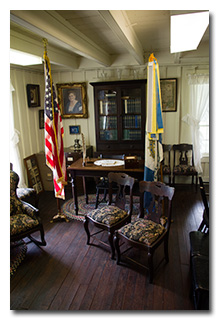 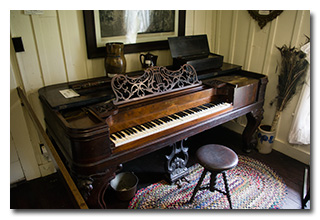 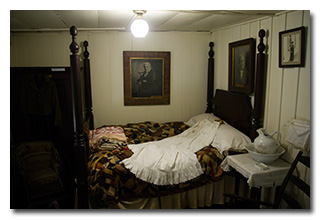 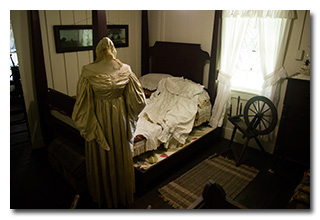