From the Lewis and Clark National Historic Trail website: 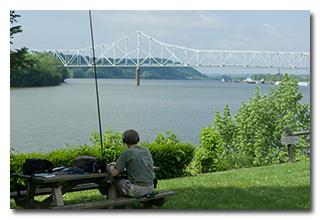 On Thursday, May 19, 2022, two members of the Southeast Ohio Radio Adventure Team performed successful simultaneous activations of Tu-Endie-Wei State Park and Lewis and Clark National Historic Trail in West Virginia as part of the Parks on the Air (POTA; link) program.

Eric, Miles, and Theo arrived at the park at about 1400 UTC. After walking Theo and considering places to set up his station, Eric decided to set up on an available picnic table overlooking the confluence of the Kanawha and Ohio Rivers. Eric and Miles deployed Eric's QRPGuys N2CX-inspired triband vertical supported on a Goture Red Fox Super Hard 720 carbon-fiber fishing pole and Eric deployed his KX3 on the picnic table. Eric was on the air at 1410 UTC. 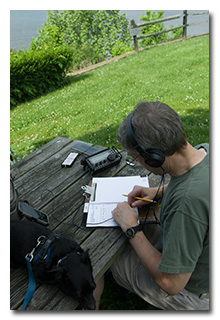 Eric was disappointed to find that his N2CX-inspired antenna no longer provided a good SWR match on 40, 30, or 20m. The SWR wasn't so high Eric was afraid to use the antenna, and he chose to continue using the antenna during this activation and rely on the KX3's internal antenna tuner to keep the transceiver happy.

Eric began operations on 40m and his first QSO was a P2P QSO at 1412 UTC with KD8IE who was activating Auburn Marsh State Wildlife Area (K-9445) in Ohio. Many minutes of calling CQ failed to produce a second QSO on 40m at this time.

Switching to 20m, Eric's first QSO there came at 1421 UTC with K1BX in New Hampshire. QSOs on 20m came steadily, with Eric's eighth QSO on the band coming at 1432 UTC. This run included a P2P QSO with K0BWR who was activating Battle of Island Mound State Historic Site (K-3338) in Missouri and QSOs with operators located in New Hampshire, Florida (2), Oklahoma, Texas, New York, and Missouri. 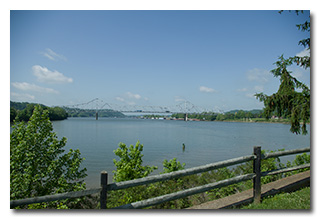 Pausing to check POTA Spots for P2P QSO opportunities, at 1435 UTC Eric made a P2P QSO on 40m with K4QD who was activating Three Forks State Conservation Area (K-8375) in Florida.

Eric finished his activation by once more checking POTA Spots for P2P QSO opportunities and at 1444 UTC he made a P2P QSO on 40m with WG8X who was activating Sycamore State Park (K-1995) in Ohio.

In all, Eric made thirteen QSOs with four P2P QSOs. All of Eric's QSOs were CW and were made at the 5-watt level.

Miles did not operate but helped with set-up and tear-down, did most of the activation photography, and tended to little dog Theo.

During the operation, he and Miles were visited by ranger Steven Browning. The ranger was familiar with the Parks on the Air program and was pleased to have Eric and Miles at Tu-Endie-Wei State Park participating in the program. He added that Eric's current antenna installation was fine, even the spike supporting the antenna but cautioned that nothing was to be driven into the ground in the middle of the park, near the monuments or the Mansion House. 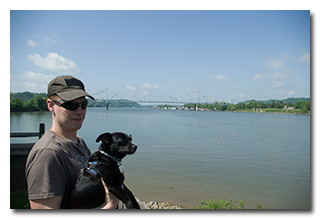 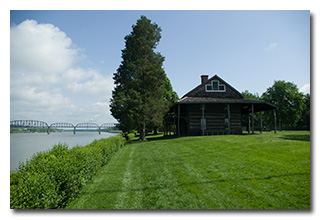 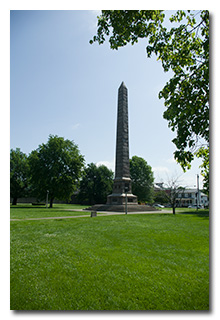