Prickett's Fort State Park, located five miles north of Fairmont in Marion County, features a reconstruction of the original Prickett's Fort, which served as a place of refuge during colonial times. This historical park commemorates late 18th-century life on the Virginia frontier. 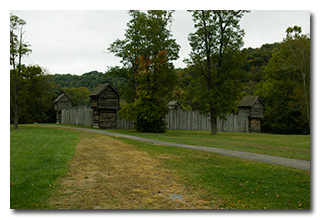 On Friday, October 2, 2020, one member of the Southeast Ohio Radio Adventure Team performed a successful activation of Prickett's Fort State Park in West Virginia as part of the Parks on the Air (POTA; link) program.

On a cool, overcast early Fall day, Eric McFadden, WD8RIF, performed the activation of Prickett's Fort State Park at the boat-ramp area of the park. Eric was accompanied by his wife Vickie and their dogs, Theo and Mindy.

Eric, Vickie, and the dogs arrived at the Prickett's Fort State Park at 1430 UTC. After stopping to look at and photograh the fort, they made their way to the boat-ramp area at the confluence of Prickett Creek and the Monongahela River, where Eric found a suitable place to park and set up his station. While Vickie explored the area with the little dogs, Eric deployed his 28½' wire antenna on his 31' Jackite telescoping fiberglass mast and drive-on base. Because of the cool temperature, Eric set up his KX3 inside the car and was on the air by 1453 UTC. 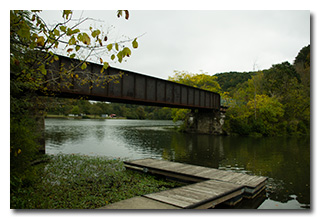 Pleased to find he had good cell-signal at the site, Eric self-spotted himself to POTA Spots (link) and began operations on 80m. 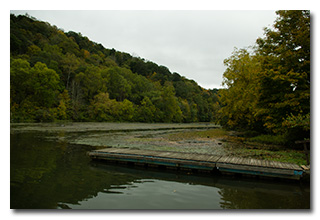 Switching to 40m, Eric quickly made a string of twenty-two QSOs, starting with AE4Y in North Carolina at 1513 UTC and ending with N4HID in Kentucky at 1538 UTC.

Eric switched to 20m at 1540 UTC but after several minutes of calling "CQ", no QSOs were made.

Before tearing down his station, Eric again checked POTA Spots and at 1547 UTC made a P2P QSO on 40m with W5ZDW who was activating Fontainebleau State Park (K-2362) in Louisiana.

In all, Eric made twenty-eight QSOs, which included three P2P QSOs. All of Eric's QSOs were CW and were made at the 5-watt level.