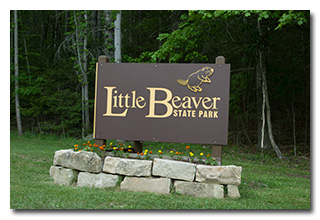 On Saturday, May 21, 2022, three members of the Southeast Ohio Radio Adventure Team performed successful activations of Little Beaver State Park in West Virginia as part of the Parks on the Air (POTA; link) program.

Following an afternoon spent exploring and activating New River Gorge National Park (link), the trio (plus Theo-dog) arrived at Little Beaver State Park about 2015 UTC. A few minutes of exploration led them to a shaded grassy area near the state park's camping area, adjacent to park of the disc-golf course.

Thomas chose to take advantage of the available picnic table, hanging an end-fed wire antenna in a tree and placing his Elecraft KX2 on the picnic table. 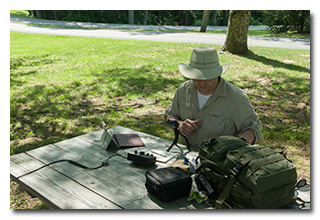 Thomas at his station; photo by Miles McFadden 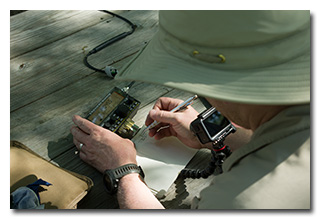 Thomas at his station; photo by Miles McFadden


Eric found a shady location at a distance from Thomas, strapped his 31' Jackite telescoping fiberglass mast to his folding camp-chair to support his 28½' wire vertical, and placed his Elecraft KX3 on the camp-chair's fold-up table. 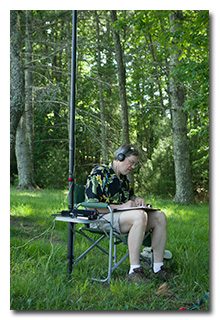 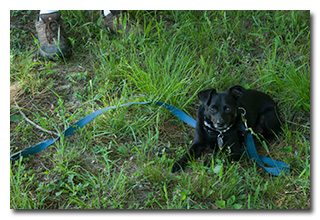 
Thomas and Eric both had good cell-signal and were able to use to POTA Spots (link) to spot themselves and to look for park-to-park (P2P) QSO opportunities.

Eric began his operations by using POTA Spots to identify P2P QSO opportunities and at 2031 UTC he completed a P2P QSO on 20m with N9MM who was activating a park in Michigan. (Eric transcribed the park designator wrong; when he looked up the park, it showed to be in Massachusetts.)

Finding himself a frequency to run on 30m while Thomas ran on 20m, Eric's first QSO on 30m came at 2035 UTC with K1EEB in Maine. QSOs came steadily, with Eric's twelfth QSO on 30m coming at 2050 UTC with WA2JMG in New York. This run included a P2P QSO with Thomas and QSOs with operators located in Maine, New Hampshire (2), Vermont, Georgia, Connecticut, Wisconsin, West Virginia, Florida, Quebec, and New York (2).

Pausing to check POTA Spots, at 2053 UTC Eric made a second P2P QSO with Thomas, this time on 20m.

Switching to 40m, Eric's first QSO there came at 2056 UTC with KG2DIG in Kentucky. As on 30m, QSOs came steadily, with Eric's ninth QSO in this run coming at 2105 UTC with AC3IU in Pennsylvania. This run included QSOs with operators located in Kentucky, Tennessee, Ohio, Pennsylvania (3), New York, Minnesota, and Virginia.

Finally, pausing again to check POTA Spots, at 2109 UTC Eric completed a P2P QSO on 20m with WC1N who was activating Manuel F. Correllus State Forest (K-4696) on the island of Martha's Vineyard in Massachusetts.

In all Eric made twenty-four QSOs, including four P2P QSOs. All of Eric's QSOs were CW and were made with five watts output.

Thomas's report will be available soon on his blog, QRPer.com.