Nestled in the heart of whitewater rafting country, Hawks Nest State Park is a 270-acre recreational area with a nature museum, aerial tramway, jetboat rides, hiking trails and one of the most challenging whitewater boating waterways in the nation. Its 31-room lodge offers luxurious rooms, dining and spacious conference and meeting facilities. Located just 10 miles north of the New River Gorge Bridge, Hawks Nest is known for its scenic overlook, which provides a bird's eye view of the rugged New River Gorge National Park and Preserve below. 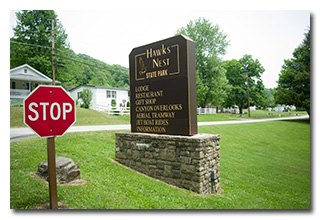 On Friday, May 20, 2022, three members of the Southeast Ohio Radio Adventure Team performed successful activations of Hawks Nest State Park in West Virginia as part of the Parks on the Air (POTA; link) program.

Following a spectacular visit and POTA activations at New River Gorge National Park (link), the trio (plus Theo-dog) arrived at Hawks Nest State Park about 1700 UTC and after a few minutes of recce, chose to set up and perform their activations in the unoccupied Midland Trail picnic shelter at the Cliffside Trail trailhead.

Thomas decided to steal Eric's Elecraft K1 for this activation to remind himself how well the venerable transceiver operates, having sold his own K1 a decade or more previously. For his antenna, he deployed an end-fed wire, suspending it from a convenient tree. 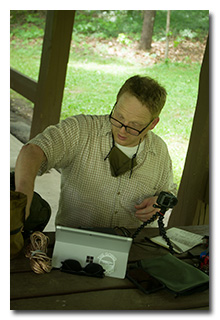 Thomas sets up his station;
photo by Miles McFadden 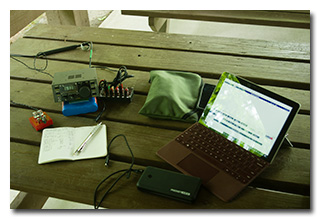 As at his two-fer activation of Tu-Endie-Wei State Park and Lewis and Clark National Historic Trail the day prior (link), Eric was disappointed to find that his QRPGuys antenna didn't provide a good SWR on any of the three bands it covered. He had hoped that changing the turns-spacing on the two toroids—something he hadn't had time to try at the previous activation—would fix the problem, but it didn't. The antenna showed about 3:1 SWR on each of 20, 30, and 40m as measured by his KX3. Rather than deploy a second antenna, Eric decided to continue with this one and rely on the KX3's built-in ATU to keep the rig happy. 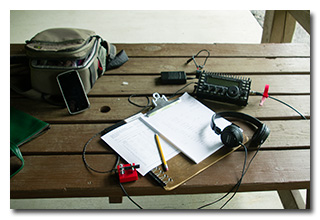 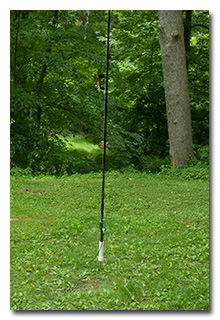 
Thomas and Eric both had good cell-signal at Hawks Nest, and they were able to use to POTA Spots (link) to spot themselves and to look for park-to-park (P2P) QSO opportunities.

Eric's first QSO came at 1729 UTC and was an uncoordinated P2P QSO with Thomas on 20m, ensuring that both operators would get hunter- and P2P-credit for Hawks Nest State Park.

Finding himself a frequency to run on 40m, Eric spotted himself and began calling CQ. His first QSO on 40m came at 1733 UTC with K3ES in Pennsylvania. A P2P QSO with WB8ERJ, who was activating Mohican-Memorial State Forest (K-5444) in Ohio, quickly followed. Eric's final QSO in this run came at 1737 UTC with KO4RSJ in Virgina.

Pausing to check POTA Spots for P2P QSO opportunities, at 1745 UTC Eric completed a P2P QSO on 40m with K3SHL who was activating Nockamixon State Park (K-1391) in Pennsylvania.

After finding himself a frequency to run on 20m, Eric's first QSO there came at 1751 UTC with WA9PWP in Wisconsin. This was followed by a QSO with KA1ZT in Florida and by a QSO with K7ULM in Montana. Eric's fourth QSO in this run at 1757 UTC with VE2PVH in Nova Scotia.

Checking POTA Spots again allowed Eric to make a second P2P QSO with Thomas, this time on 40m, at 1801 UTC.

Returning to 20m, Eric's first QSO in this second run came at 1804 UTC with K1QT in New Hampshire. QSOs came steadily, with Eric's seventh QSO in this run coming at 1813 UTC with VA2QDB in Quebec. This run included QSOs with stations located in New Hampshire (2), New Jersey, New York, Florida, Indiana, and Quebec. 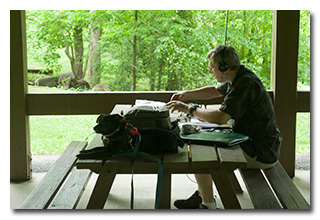 
In all Eric made seventeen QSOs, including four P2P QSOs. All of Eric's QSOs were CW and were made with five watts output.

UPDATE: Read the report (and watch the video) by Thomas about his experience at Hawks Nest State Park: https://qrper.com/2022/07/reunited-with-the-venerable-elecraft-k1-at-hawks-nest-state-park/.

Thomas and Eric found this location at Hawks Nest to be RF-quiet but very loud with lawn-care equipment running nearby. Fortunately, these machines were shut down midway through the operation

After the activations were finished and after the stations torn down and the gear stowed in the car, Thomas, Eric, Miles, and Theo hiked down the Cliffside Trail to the New River. Eric forgot to turn on his Strava app to measure the descent on the trail but Strave measured the ascent on the trail to be 0.38 miles and 300' of climb. 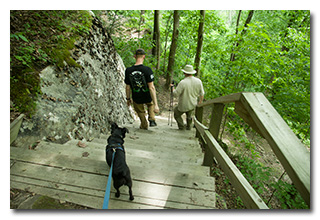 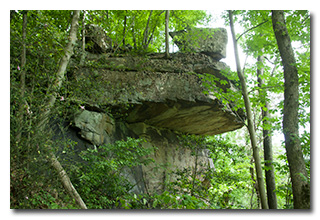 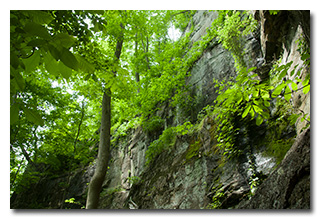 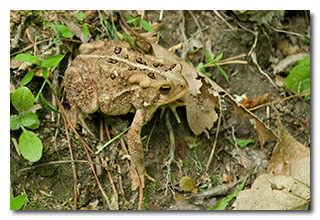 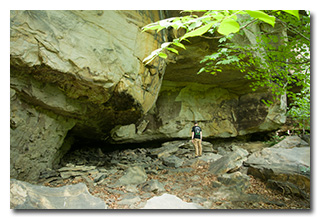 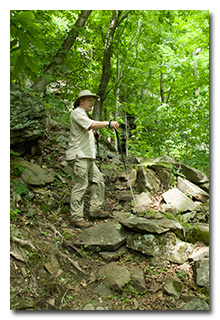