Located on a small island in the Ohio River, Blennerhassett Island Historical State Park features a Palladian mansion on the island and museum of regional history located in Parkersburg. This unique state park is visited by 40,000 people each year. This historical park is accessed by a sternwheeler riverboat from Point Park on 2nd Street in Parkersburg. Once on the island, visitors may enjoy tours of the grounds and mansion and horse-drawn carriage rides. Tours are offered when the park is open, from May through the last weekend of October. 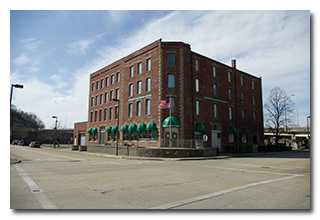 Following an activation of Muskingum River State Park (K-3520) at Devola Lock #2 (link), Eric McFadden, WD8RIF, visited the Blennerhassett Island State Park at the Blennerhasset Museum on a beautiful but gusty late-winter afternoon, arriving at about 1700 UTC. Eric was accompanied by his small dog, Theo.

The actual island of Blennerhassett Island being inaccessible until Spring, Eric chose to perform this activation at the Blennerhassett Museum, a portion of the Blennerhassett Island State Park which is located on the "mainland" in Parkersburg, West Virginia. Parking in one of the designated "Museum Only Parking" parking spots, Eric walked little Theo-dog and ate a quick picnic lunch before deploying his 28½' wire vertical on a Jackite 31' telescoping fiberglass mast and drive-on mount. Because of the wind, Eric set up his KX3 inside the car. Eric was on the air at 1717 UTC.

Because the Blennerhassett Museum is within the city of Parkersburg, Eric was not at all surprised to find he had very good cell-signal at the site, and he was able to use POTA Spots (link) to spot himself and to identify possible park-to-park (P2P) QSO opportunities.

Switching to 30m, Eric found himself a frequency to run, spotted himself on POTA Spots, and began calling "CQ POTA". His first QSO on 30m, a second QSO with W1MT in Virginia, came almost immediately at 1734 UTC. QSOs on 30m came quickly, with Eric's ninth QSO in this run coming at 1742 UTC with WA4RCW in Tennessee. This run included QSOs with operators in Virginia, Ohio, Arizona, Texas (2), South Dakota, North Carolina, Ontario, and Tennessee.

Switching to 20m, Eric found himself a frequency to run, spotted himself on POTA Spots, and began calling "CQ POTA". His first QSO on 20m came at 1745 UTC with K5PE in Texas. QSOs came very briskly, with Eric's thirty-second QSO in this run coming at 1813 UTC with KB9J in Illinois. This run included QSOs with CU3HY and CU3DI in the Azores; ON4VT in Belgium; HA9RE in Hungary; IW2NXI in Italy; F6EOC in France; DL2ND in Germany; and with operators located in Texas (4), Oklahoma (2), Minnesota (2), Oregon, New Hampshire (2), South Dakota, Florida, Missouri, Wisconsin, Connecticut (2), Colorado (2), Massachusetts (2), Illinois (2), Georgia, and Ontario.

In all, Eric made a surprising fifty-eight QSOs, including two P2P QSOs. All of Eric's QSOs were CW and were made with five watts output.