Located on a small island in the Ohio River, Blennerhassett Island Historical State Park features a Palladian mansion and museum visited by 40,000 people each year. This historical park is accessed by a sternwheeler riverboat from Point Park on 2nd Street in Parkersburg. Once on the island, visitors may enjoy tours of the grounds and mansion and horse-drawn carriage rides. 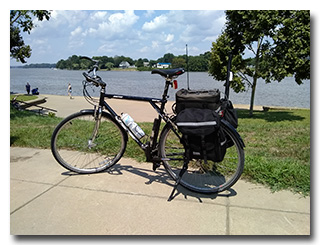 On Sunday, July 28, 2019, one member of the Southeast Ohio Radio Adventure Team performed a successful activation of Blennerhassett Island State Park (K-1803) in West Virginia as part of the Parks on the Air (POTA; link) program while participating in the Adventure Radio Society's "Flight of the Bumblebees" QRP field event. Eric McFadden, WD8RIF, was accompanied by his wife, Vickie, KC8MAJ, and succeeded in his activation despite a major logistical complication.

Because the "Flight of the Bumblebees" event encourages those who participate as "Bumblebees" to travel to their operating locations using human power, Eric had planned to bicycle with his Enhanced KX3 Travel Kit, his N2CX-inspired 20/30/40m wire vertical antenna, and his Goture Red Fox Super Hard 720 carbon-fiber mast from the Blennerhassett Museum the short distance to the Ohio River landing, board the Island Belle and then, after disembarking on Blennerhassett Island, bicycle from to the ruins of the historic "Neale House" where he hoped to set up and operate his station in the shade of a handy tree. (Neale House was built in 1833; Walt Whitman was a guest in Neale House and it was while he was a guest at Neale House that he wrote his poem, "Isle of La Belle Riviere".) This was to be the first time Eric had bicycled with the complete Enhanced KX3 Travel Kit instead of the smaller, somewhat lighter, less flexible, KX3 Travel Kit in a Pelican Case. Eric had planned to operate the first two hours or so of the four-hour "Flight of the Bumblebees", starting at 1700 UTC. However, this plan quickly fell apart through no fault of Eric's.

Disappointed that he wouldn't make his planned 1700 UTC start-time on the island but pleased that it appeared he would eventually actually get to visit the island, Eric quickly removed his bicycle from atop the car and set about configuring it for the ride on the island. A left-side pannier held his Enhanced KX3 Travel Kit, still in the LowePro backpack. A right-side pannier held the N2CX-inspired tri-band vertical antenna, the Goture 720 fishing pole, a spike/base for the pole, some bungies, a towel to sit on at the final operating location, a hat to provide protection from the sun, sunscreen, and a few other smaller items.

While Vickie drove the car to the landing, Eric cycled the short distance to the landing beyond the floodwall at Point Park and found the heavily-loaded bicycle handled well. Once at the landing, Eric rode the nicely-paved path to both ends of Point Park, admiring the beautiful Ohio River and the highway and railroad bridges soaring over the Ohio and Kanawha Rivers. 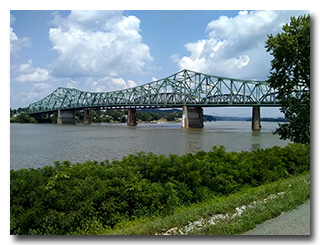 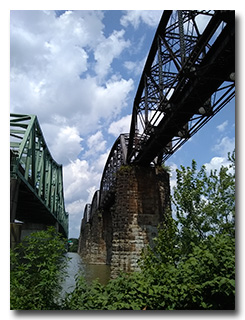 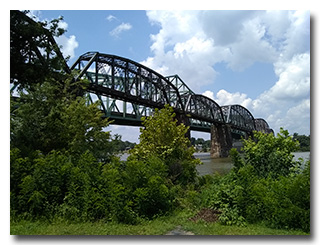 Time passed at Point Park and as 1pm approached with no sign of the arrival of Island Belle, the park docents learned that the park superintendent was coming via pontoon-boat "with news we wouldn't like". With his Flight of the Bumblebees window-of-opportunity closing, Eric decided to give up on the idea of performing his operation on Blennerhassett Island itself and began to consider options for an operation at the Blennerhassett Museum. Returning to the museum, Vickie got in line for a refund of the ticket cost and Eric began scouting the area around the museum building for a possible operation location. Eric finally decided the small grassy strip near the south-west corner of the museum was the best location he was going to find and it appeared to be part of the State Park property.

Because Eric was no longer bicycling with all his gear to his operating location on the island, he could take advantage of the relative comfort of a folding chair instead of sitting on a towel on the the ground. Eric began setting-up his station by placing his folding camping chair in the shade of the tree before erecting his Goture 720 pole as a mast. Unfortunately, the PVC-and-spkike base he had designed to use with the '720 failed to hold the mast vertical in the breeze. Fortunately, immediately adjacent to the chosen operating location was a yellow, five-foot tall, hollow post extending vertically from the ground and Eric was able to drop the bottom of the Goture 720 into this pipe to get a solid base impervious to the breeze.

Because Eric had hoped to give his good friend and fellow SEORAT-member, K8RAT, the opportunity to work Blennerhassett Island State Park on 80m, Eric chose to start operations using the 28½' end-fed wire that's always part of the Enhanced KX3 Travel Kit instead of the N2CX-inpsired wire vertical. Eric deployed the 28½' wire as an inverted-vee, supporting the center of the run on the Goture 720 and tying the far end off on his bicycle. Eric deployed three 17' counterpoise wires directly on the ground. Eric placed his KX3 on the camping chairs swing up table and was on the air by 1735 UTC.

Alas, K8RAT was unable to hear Eric at all on 80m—and Eric could hear Mike only at ESP-level signal-strength—so no QSO was achieved on 80m.

Changing to 40m, Eric found a clear frequency and began to call CQ, alternating between "CQ POTA" and "CQ FOBB". He was surprised when the first call to come back to him, at 1742 UTC, was K8RAT. Mike spotted Eric to the POTA Spots page and Eric was quickly able to work POTA Hunters and FOBB participants quickly. Eric's twelfth and final QSO on 40m came at 1802 UTC with VE3LDT and his distinctive bug-fist.

At the begininng of Eric's operation on 40m, he had a very high noise level, S5 or so on the KX3's S-meter, which he had attributed to being in "the big city". He had just engaged the KX3's DSP Noise Reduction function, which helped quite a bit, when a car in the adjacent parking lot drove off, taking the noise with it. As the car drove off, the 40m noise-floor dropped almost completely away and Eric was actually able to engage the KX3's 20dB preamp to aid in copying the weaker signals. Had that car not been idling when the 80m QSO with K8RAT has been attempted, chances are Eric would have been able to give Mike a report higher than the 119 he did give Mike.

Changing to 20m, Eric began tuning around to find a clear frequency but instead found N4KGL calling "CQ FOBB". A QSO was completed at 1805 UTC, at which time K3UT threw his call out to 'KGL. Strangely, 'KGL didn't come back to 'UT, nor did he begin again to call CQ, so Eric gave 'UT a call and a QSO was completed at 1808 UTC. Eric had had no intention of stealing N4KGL's frequency but no sooner had he signed with K3UT than a torrent of calls came. In just twenty-minutes, eighteen QSOs were completed, with both POTA Hunters and FOBB participants. When the dust finally settled about 1830 UTC, Eric finished his operation by tuning around on 20m to find other FOBB participants working frequencies and QSOs with N0SS, KF0UR, and K6EI were made between 1834 and 1844 UTC. In all, 20m provided a total of twenty-one QSOs. (Back at home that evening, Eric emailed an apology to N4KGL for stealing his frequency.)

Of Eric's total of thirty-three QSOs, sixteen included the complete FOBB exchange. Most of the rest of the QSOs were with calls Eric recognized as POTA Hunters.

Despite remaining disappointed that he didn't get to ride on the Island Belle or to visit Blennerhassett Island, Eric was pleased he was able to pull off the combined POTA/FOBB operation. Eric hopes to attempt another POTA activation, this time on Blennerhassett Island itself, soon.

One bit of good news was that after Eric's initial spot to POTA Spots by K8RAT, POTA Spots successfully skimmed RBN to follow Eric's band-change.