One of West Virginia's most iconic locations, Babcock State Park has 4,127 acres of stunning scenery. Located 20 miles southeast of the New River Gorge Bridge, the park is most known for the Glade Creek Grist Mill, a fully functional replica of the original Cooper's Mill, which once stood on the grounds. Other attractions include recreational activities like hiking, fishing and mountain biking, as well as whitewater rafting nearby in the New River Gorge. 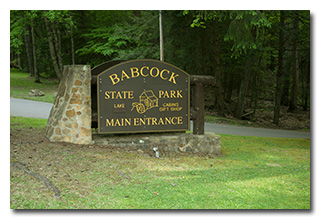 Over the period from Thursday, May 19 through Sunday, May 22, 2022, three members of the Southeast Ohio Radio Adventure Team performed several successful activations of Babcock State Park in West Virginia as part of the Parks on the Air (POTA; link) program.

Thomas arrived at the Babcock State Park campground first, verified the campsite reservations, set up his tent, verified the campground WiFi, and did a quick tour of the state park. Shortly thereafter, Eric, Miles, and Theo-dog arrived, having performed successful simultaneous activations of Tu-Endie-Wei State Park (K-1823) and Lewis and Clark National Historic Trail (K-4572) (link) and having been subsequently distracted first by the historic railroad depot in Gauley Bridge, West Virginia (info at NPA), and then by the nearby Cathedral Falls within New River Gorge National Park (info at NPS), where Eric and Miles were to first encounter what would become a recurring theme during this RATpedition: the roaring waters of West Virginia. 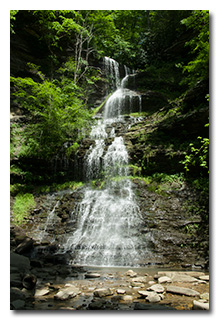 Water from the Cane Branch roars over Cathedral Falls

After Eric and Miles made their camp, and after the Thomas and Eric performed successful activations of Beury Mountain Wildlife Management Area (link), and after Miles grilled up fine burgers for dinner, Thomas and Eric deployed Eric's half-size W3EDP antenna, suspending it from a conveniently located tree. 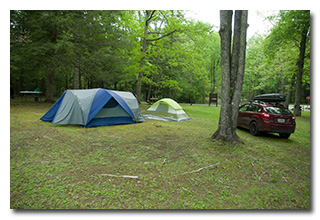 Home for Three Nights: The Campsite

Using the half-size W3EDP antenna and Eric's Elecraft KX3, and while wearing headlamps on their foreheads, first Eric and then Thomas each performed successful Late Shift activations of Babcock State Park.

After Eric completed his activation, he surrendered the antenna and transceiver to Thomas to use to complete his Late Shift activation of Babcock State Park. 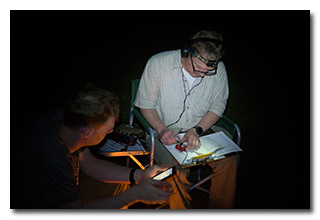 
During the night, some sort of animal—probably a raccoon—ransacked the group's cooler, taking Eric's entire loaf of gluten-free bread, three boxes of fudge, and several packets of lunchmeat. Eric had been awakened by the commotion but little Theo-dog didn't even stir. On subsequent nights, the cooler was kept inside one of the cars.

The sign at the Babcock State Park main entrance 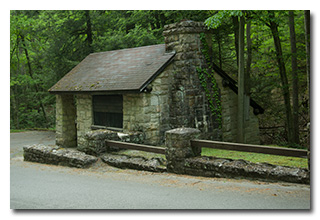 A rustic building at the main entrance 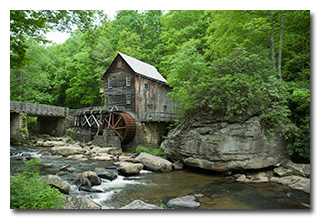 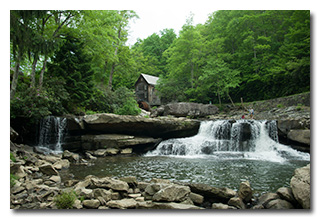 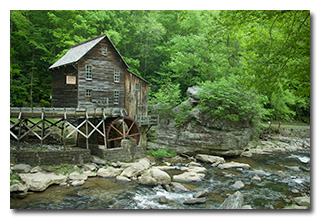 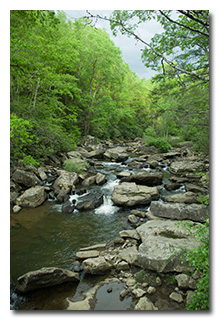 Glade Creek roars toward the gristmill 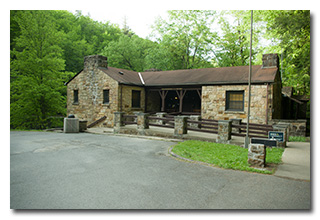 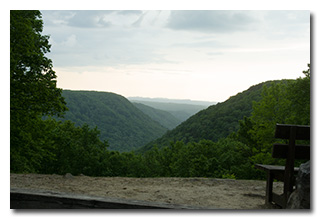 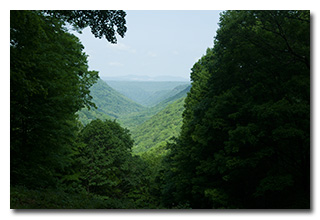 Views from the overlooks


Back at their campsite, Thomas and Eric again took turns using the half-size W3EDP antenna and Eric's Elecraft KX3 to each perform a second Late Shift activation of Babcock State Park, again wearing headlamps to allow them to work in the darkness.

Switching to 40m, Eric's first QSO there came at 0215 UTC with K8OZR in Ohio. QSOs came quickly, with his thirteenth QSO on the band coming at 0230 UTC with KQ9L in Illinois. This run included a P2P QSO with N1RBD who was activating Little Ocmulgee State Park (K-2189) in Georgia and QSOs with operators located in Ohio (3), Illinois (2), Florida, Georgia (2), New York, North Carolina (2), Michigan, and Minnesota.

Strangely, no one though to photograph Thomas or Eric as they worked on their Late Shift activations.

Saturday evening and Saturday night brought the first rain and thunderstorms of the RATpedition. The evening rain spoiled dinner cook-out plans but the rain that fell during the night sounded nice on the tents. Sunday morning found Thomas's high-quality vintage tent to be entirely dry inside but Eric's inexpensive tent was wet in the corners. (Eric decided he will look into applying seam-sealant before his next outing with the tent.)

After checking out of the campground Sunday morning, Eric, Miles, Thomas, and Theo drove to the Sugar Run Camp Picnic Area within Babcock State Park to each perform their final activations of this park during this RATpedition.

Thomas grabbed the rustic picnic shelter as his operating location, leaving Eric his choice of the many picnic tables outside the picnic shelter. Eric chose a picnic table that had some distance from Thomas's station, was level, and had no overhanging trees. He and Miles bungeed Eric's 31' Jackite telescoping mast to the picnic table and deployed the 28½' wire vertical on the mast. Wanting to "shake things up a bit", Eric chose to perform this activation with his four band (15, 20, 30, 40m) Elecraft K1 tranceiver.

Eric began his operation by making a P2P QSO at 1428 UTC with Thomas, ensuring that both he and Thomas earn both hunter- and P2P-credit for Babcock State Park.

This high-elevation location within Babcock State Park had cell-signal, so Eric next used POTA Spots to identify possible P2P QSO opportunities and at 1432 UTC he made a P2P QSO on 30m with NA9M who was activating Waunakee Marsh State Wildlife Area (K-4339) in Wisconsin.

Switching to 20m, Eric's first QSO there came at 1449 UTC with WD5GRW in Texas. QSOs came quickly, with Eric's eleventh QSO in this run coming at 1500 UTC with WE1C in Massachusetts. This run included a second P2P QSO with Thomas, a QSO with F1BLL in France, and QSOs with operators located in Texas (2), Kansas, California, Iowa, Maine, South Dakota, West Virginia, Arizona, and Massachusetts. 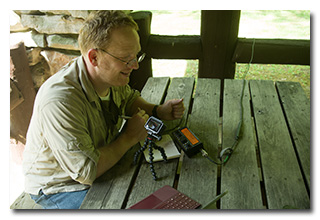 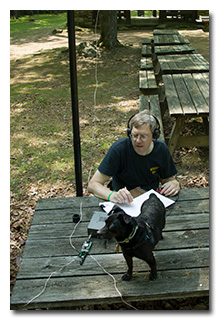 
Eric would also submit his logs to the World Wide Flora and Fauna in Amateur Radio (WWFF; link) program.