Ryerson Station State Park is in Greene County in the southwestern corner of Pennsylvania, near the West Virginia border. The 1,164-acre park features a swimming pool, campground, hiking, fishing, picnicking, and winter activities. 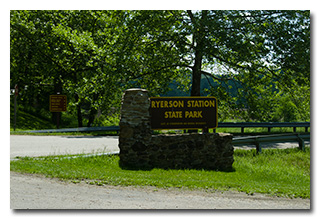 On Saturday, June 5, 2021, one member of the Southeast Ohio Radio Adventure Team performed a successful activation of Ryerson Station State Park in Pennsylvania as part of the Parks on the Air (POTA; link) program. This was to be the fourth of four parks to be visited on the second day of a two-day outing, with two parks having been visited the previous day. The parks previously visited in this outing were Shreve Lake Wildlife Area, Beach City Wildlife Area, Egypt Valley Wildlife Area, Willow Grove State Forest, and Burches Run Wildlife Management Area.

After having left his son Miles at the 220th EIS at the Zanesville Air National Guard Base, and while taking a very roundabout route from Zanesville back to Athens, Eric McFadden (WD8RIF) activated Ryerson Station State Park on a beautiful, sunny afternoon. 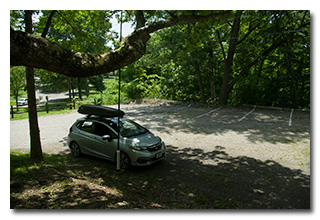 After a truly spectacular drive from Burches Run WMA on ridgetop roads in West Virginia and Pennsylvania, Eric arrived at the Polly Hill / McNay Ridge Group Tenting Area at about 1700 UTC. Eric had chosen this area of the park because from the maps it appeared to be the only part of the park with elevation that was accessible by car and, thus, had the best chance of having cell-signal. Eric found the McNay Ridge Group Tenting Area to be gated-shut and the nearby public parking area had an inconveniently-located power line running over it. After driving through the camping area and speaking with a pair of rangers, Eric realized his best option, despite the power line, was the public parking area. In the parking area, Eric found a place where he could deploy his mast up through the canopy of the a large tree such that, were the mast to fall, the branches of the tree would make it impossible for the mast to fall onto the power line. Confident now that he could safely deploy his antenna, Eric deployed his 28½' wire antenna on his 31' Jackite telescoping fiberglass mast and drive-on mount. Eric set up his KX3 inside the car and was on the air at 1733 UTC. 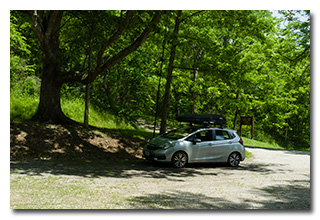 Eric was disappointed to find that, despite the high elevation, he had no cell-signal at this location. Against such an eventuality, Eric had previously announced his activation on the POTA Activations webpage and had arranged for his friends K8RAT and K4SWL to watch the Reverse Beacon Network (RBN) and spot him to POTA Spots when he was heard by the RBN.

Eric began operations on 80m and, after ten minutes of calling CQ produced no QSOs, switched to 40m. Two minutes of calling CQ on 40m produced a short rag-chew with N2AK in New Jersey. This was immediately followed by a QSO with POTA Activator/Hunter KC5F in North Carolina who confirmed that Eric had been spotted on the POTA Spots website. QSOs came steadily, and Eric made ten QSOs on 40m in about fifteen minutes. This run on 40m included a park-to-park (P2P) QSO with K1EMT who was activating Mountain Tea State Forest (K-7369) in Indiana.

Switching to 30m, Eric made an additional nine QSOs in twelve minutes.

In all, Eric made nineteen QSOs in about forty-five minutes. All of Eric's QSOs were CW and were made at the 5-watt level.