Located north of the Lower Blue Licks Crossing in present day Robertson County, the site of the Battle of Blue Licks enshrines the memory of the men who died in one of the worst military defeats of the American Revolution.

The Battle of Blue Licks has the combined drama of frontier warfare and the Revolutionary War. On August 19, 1782, nearly seventy Kentuckians died in what some historians have called the "Last Battle of the American Revolution." While that claim is debatable, the struggle at Blue Licks embodies the conflict between the American Indian, Kentucky settlers, and the British Crown.

Two members of the Southeast Ohio Radio Adventure Team succeeded in performing a valid activation of Blue Licks Battlefield State Park, K-1274, in Kentucky as part of the the Parks on the Air (POTA; link) program. Eric McFadden, WD8RIF, and Miles McFadden, KD8NKC, visited the park on a gorgeous Autumn day on their way to Georgetown, Kentucky for a party celebrating an aunt's 80th birthday. 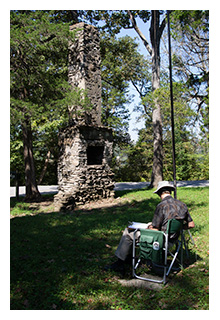 The pair arrived at the park just a few minutes after 1600 UTC, and selected an operating location at what appeared to be the highest location in the small park. They had a picnic lunch before setting up Eric's Enhanced KX3 Travel Kit and 28½' end-fed wire supported by the MFJ-1910 33' fiberglass mast. Eric utilized his new Harbor Freight "Folding Aluminum Sports Chair" (link). Eric was on the air by 1630 UTC.

Eric started operating on 20m and his first QSO came at 1631 UTC with UR3IDD/MM who, unfortunately, didn't say where his ship was located. Eric made three quick Texas QSO Party contacts on 20m before switching to 40m to work first KA2DDX and then N2CX, that latter of whom was activating Fort Mott State Park (KFF/K-1617) in New Jersey. Eric returned to 20m to make three more Texas QSO Party contacts and then returned to 40m to run a frequency. His calls of CQ netted QSOs with K4WOP, W3BBO, and VE3ZN, the last QSO coming at 1738 UTC. Because an hour of driving remained before reaching Georgetown, Eric ceased operations at that point with twelve QSOs.

Eric's twelve QSOs were sufficient to achieve a valid activation of Blue Licks Battlefield State Park within the POTA program which requires at least ten QSOs be made within one UTC day.

Eric also submitted his log to the World Wide Flora and Fauna in Amateur Radio (WWFF; link) program although his twelve QSOs were not sufficient to achieve a valid activation within the program which requires 44 QSOs be made. However, the WWFF program allows these 44 QSOs be made over any number of visits.