Currently, the Dawkins Line Rail Trail is 18 miles long. An additional 18 miles will be added in the second phase of the trail work — when completed, the path will be 36 miles. This trail, built on top of rails from an out-of-use rail bed, is a major attraction for walkers, bicyclists and horseback riders from all over Kentucky and beyond. Many come to ride or walk with friends and others incorporate it into their daily active routines. Open year-round.

The first 18-mile leg of the trail, from Hagerhill in Johnson County to Royalton in Magoffin County, was opened to hikers, cyclists and horseback riders on June 15, 2013. This 18-mile section features 24 trestles and the Gun Creek Tunnel, which is 662 feet long. The trail follows the old Dawkins Line railroad bed that runs from Hagerhill to Evanston, KY. The Dawkins Line Rail Trail is the largest rail-to-trail in the state. Check back for updates about trail construction and make plans to visit this excellent hike and bike trail. 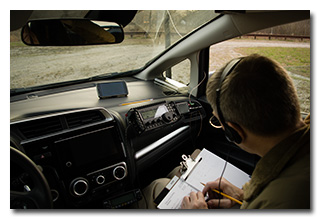 Eric McFadden, WD8RIF, and Miles McFadden, KD8KNC, performed the activation of Dawkins Line Rail Trail State Park at the Jenny's Creek Trailhead at Mile 3.8 of the trail. They were accompanied by Eric's small dog, Theo.

The trio arrived at the Jenny's Creek Trailhead at about 2115 UTC, just as dusk was approaching. Parking the car out of the traffic pattern, Eric and Miles deployed Eric's 28½' wire antenna on his 31' Jackite telescoping fiberglass mast and drive-on base. Because of the oncoming darkness and dropping temperature, Eric set up his station in his car and deployed his KX3 on the new mobile-mount on the car's dashboard. Eric was on the air at 2122 UTC. 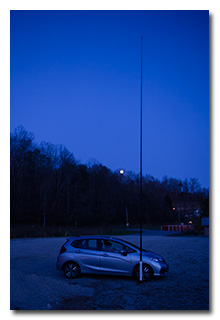 Against expectations, given the trailhead's proximity to US Route 23 and a residential area, Eric found he had no cell-signal and was not able to self-spot himself on the POTA Spots website, to look for park-to-park (P2P) QSO opportunities, or even to text his friend K8RAT with frequencies for spotting-support.

Eric began operations on 80m and eight minutes of calling "CQ POTA" resulted in single QSO, at 2130 UTC, with W4ELP in Virginia.

Switching to 40m, Eric had to go high in the CW portion of the band to avoid CQ World Wide CW Contest activity. Ten minutes of calling "CQ POTA" resulted in a nice seven-minute rag-chew with K4KKQ in Tennessee. Sometime during this QSO, Eric must have been properly spotted on the POTA Spots website because as soon as he signed with K4KKQ, Eric was inundated with calls. First, at 2150 UTC, came a QSO with VE3LDT in Ontario. QSOs came quickly, with Eric's 31st QSO on 40m coming at 2221 UTC with K1RO in New Hampshire. This run included a P2P QSO at 2152 UTC with ND9M who was performing an activation of Florida Caverns State Park (K-1867) in Florida.

In all, Eric made thirty-two QSOs, including one P2P QSO. All of Eric's QSOs were CW and were made at the 5-watt level. Miles did not operate but helped with navigation, set-up and tear-down, and photography. 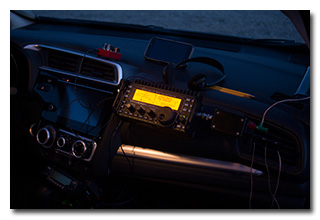