Throughout his life, Charles Young overcame countless obstacles in his ascent to prominence. In spite of overt racism and stifling inequality, Young rose through the military ranks to become one of the most respected leaders of his time. A well-rounded man with a steadfast devotion to duty, Young led by example and inspired a generation of new leaders. 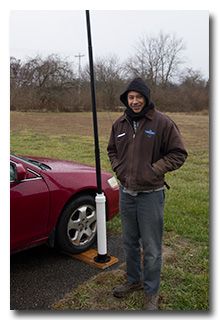 Eric and Miles arrived at Charles Young Buffalo Soldiers National Monument under gray and rainy skies at about 1915 UTC to find Richard already there and the Visitor Center to be closed. Because of the wind and rain, Eric chose to operate in the car and he and Miles deployed the now-short-by-ten-inches 28½' wire vertical on the 31' Jackite telescoping fiberglass mast supported on the drive-on mount, the KX3 was hung on the car's glove-box door, and Eric was on the air at 1932 UTC. (Why was the antenna short? See the report on the activation at Dayton Aviation Heritage National Historical Park (link).) Richard, who has a growing interest in participting in POTA, had hoped to attempt an activation of the site using his portable HF station but could find no available power outlets on the outside of the building so he instead joined Eric and Miles in the McFadden car to watch Eric operate.

Starting on 80m, Eric's first and only QSO on 80m came at 1935 UTC with Eric's good friend and fellow SEORAT-member K8RAT. After subsequent calls of "CQ POTA" went unanswered, Eric switched to 40m at 1939 UTC.

In all, Eric made nineteen QSOs in about forty-five minutes. All of Eric's QSOs were CW and were made with a power output of five watts.

Miles did not operate but helped with navigation and helped with station set-up and tear-down.