High atop one of Cincinnati's most prominent hilltops stands the two-story Greek Revival house where William Howard Taft was born and grew up. Hard work, a good education, and an interest in civic duty are attributes that made the Taft family outstanding leaders over the years. The environment that shaped Taft's character and philosophy is highlighted on a visit to the site. 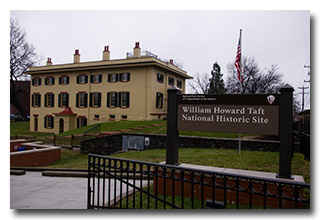 On Saturday, November 30, 2019, two members of the Southeast Ohio Radio Adventure Team performed a successful activation of William Howard Taft National Historic Site in Ohio as part of the Parks on the Air (POTA; link) program. Eric McFadden, WD8RIF, and Miles McFadden, KD8KNC, performed the activation of William Howard Taft National Histocic Site on their way to Versailles, Kentucky for the larger McFadden-family Thanksgiving gathering. This activation was the first of five activations to be made over two days and 624 miles of driving.

Eric and Miles arrived at William Howard Taft National Historic Site under gray skies at about 1540 UTC and, after introducing themselves to the park ranger and making some photos of the site, they set up the station in the park's rear parking lot. Because of wind and the threat of rain, Eric chose to operate in the car and he and Miles deployed the 28½' wire vertical on the 31' Jackite telescoping fiberglass mast supported on the drive-on mount, the KX3 was hung on the car's glove-box door, and Eric was on the air at 1602 UTC.

Switching to 20m at 1639 UTC, Eric's first QSO there was with N7YY at 1645 UTC. Eric's eleventh QSO on 20m came at 1657 UTC with KI8O. About eight minutes into the run on 20m, Eric's Whiterook MK-33 single-lever paddle failed with a fatique-fracture of the lever. Fortunately, Eric had brought his homemade cootie key (photo) as a spare and he was able to finish his operation with the homemade key. Highlights of the run on 20m included QSOs with famous "goat hiker" WG0AT and with EA2LU in Spain.

In all, Eric made twenty-eight QSOs in fifty-five minutes. All of Eric's QSOs were CW and were made with a power output of five watts.