Three exceptional men from Dayton, Ohio, Wilbur Wright, Orville Wright and Paul Laurence Dunbar, found their creative outlet here through accomplishments and failures, and finally success. However, these men offered the world something far greater, they offered the world hope, and the ability to take a dream and make it a reality. 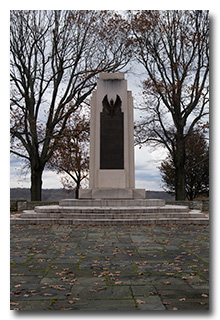 On Sunday, December 1, 2019, two members of the Southeast Ohio Radio Adventure Team performed a successful activation of Dayton Aviation Heritage National Historical Park in Ohio as part of the Parks on the Air (POTA; link) program. Eric McFadden, WD8RIF, and Miles McFadden, KD8KNC, performed the activation of Dayton Aviation Heritage National Historical Park at the Huffman Prairie Flying Field Interpretive Center following a night spent on Wright-Patterson Air Force Base and a far-too-short hour spent at the National Museum of the United States Air Force. This activation was the second of five activations to be made over two days and 624 miles of driving, the first being the activation of William Howard Taft National Historic Site the day before (link).

Eric and Miles arrived at Dayton Aviation Heritage National Historical Park under gray and blustery skies at 1500 UTC and, after introducing themselves to the park ranger, they set up the station in the Interpretice Center's parking lot. Because of blustery wind and the threat of rain, Eric chose to operate in the car and he and Miles deployed the 28½' wire vertical on the 31' Jackite telescoping fiberglass mast supported on the drive-on mount, the KX3 was hung on the car's glove-box door, and Eric was on the air at 1522 UTC.

Eric's first QSO on 40m was a second QSO with VE3LDT which came at 1534 UTC. QSOs on 40m came very quickly with the twenty-first QSO on 40m coming at 1609 UTC with WB9HFK. About ten minutes into the run on 40m, Eric's antenna began to fail and Eric was able to determine that the 28½' wire had broken inside the clear sheath about 10" from the feedpoint, perhaps due to the blustery wind conditions. Eric was able to make a field-expedient repair of the antenna by cutting the wire at the break and re-installing the banana plug on the now-shorter-by-10" antenna.

In all, Eric made thirty-two QSOs in just over an hour. All of Eric's QSOs were CW and were made with a power output of five watts.

Miles did not operate but helped with navigation, helped with station set-up and tear-down, and helped with the activation photography.