Gauley River National Recreation Area protects 25 miles of the Gauley River and six miles of the Meadow River that pass through scenic gorges and valleys containing a wide variety of natural and cultural features. Every September as water is released from Summersville Dam, whitewater enthusiasts from all over the world flock to the Gauley River to experience what is considered by many people to be one of the most thrilling whitewater rafting opportunities in the country. Dropping more than 668 feet through 25 miles of rugged terrain, the Gauley River's complex stretch of whitewater features more than 100 rapids with a steep gradient, technical runs, an incredible volume of water and huge waves. Its vigorous rapids, scenic quality and inaccessibility combine to make Gauley River one of the premier whitewater runs in the world. 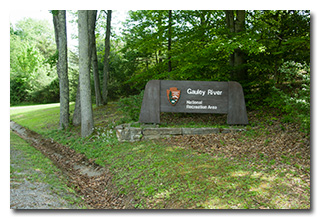 On Friday, May 20, 2022, three members of the Southeast Ohio Radio Adventure Team performed successful activations of Gauley River National Recreation Area in West Virginia as part of the Parks on the Air (POTA; link) program. 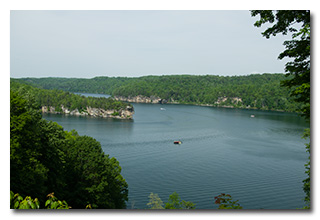 Summersville Lake above the dam,
as viewed from the highway atop the dam


Following successful POTA activations at New River Gorge National Park (link) and at Hawks Nest State Park (link), the trio (plus Theo-dog) arrived at the Gauley River Tailwaters area about 2030 UTC, intending to perform their activations in a parking area well above the bottom of river gorge, the same place Thomas and Eric had individually performed their activations of Gauley River NRA during 2016's National Parks on the Air (NPOTA). However, they decided to first check out the camping and river-access areas and were surprised to find available cell-signal and beautiful locations to set up and operate their stations right on the river bank, so they decided to activate at the river's edge.

Thomas chose to set up his station on a shaded, rocky, beach-like area, hanging an end-fed wire antenna from a tree and mounting his Elecraft KX2 on his folding knee-board.

Eric chose to set up right on the giant rocks at the river's edge, hanging his 28½' wire vertical on his 31' Jackite telescoping fiberglass mast strapped to his folding camp-chair, and placing his Elecraft KX3 on the camp-chair's fold-up table. Eric chose to power his KX3 with his Talentcell 12v 3000mAh lithium ion battery pack (link). This would be the third activation on this battery without a recharge; would the partially-charged battery last for the whole activation? 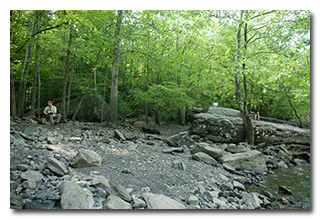 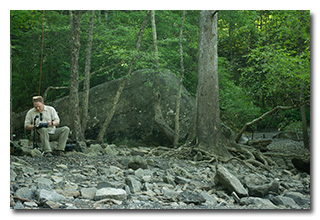 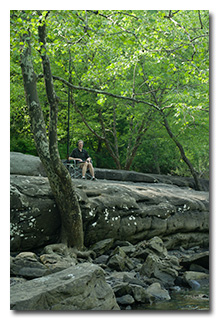 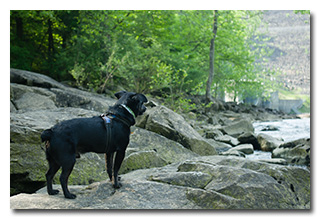 
Surprisingly, Thomas and Eric both had good cell-signal, and they were able to use to POTA Spots (link) to spot themselves and to look for park-to-park (P2P) QSO opportunities.

Eric began his operations on 20m and his first QSO came at 2100 UTC with W1PID in New Hampshire. This was immediately followed by a QSO with K5SJC in Colorado.

Pausing to check POTA Spots for P2P QSO opportunities, at 2104 UTC Eric made a P2P QSO on 30m with Thomas, ensuring that both operators receive hunter- and P2P-credit for Gauley River National Recreation Area.

Returning to run a frequency on 20m, Eric made a QSO at 2105 UTC with W6LEN in California.

Switching to 30m to run a frequency, Eric completed a QSO at 2131 UTC with VA3NQ in Ontario.

In all Eric made fifteen QSOs, including three P2P QSOs. All of Eric's QSOs were CW and were made with five watts output.

The Talentcell battery, which had powered the KX3 at New River Gorge National Park (link), at Hawks Nest State Park (link), and finally at this activation of Gauley River National Recreation Area, had proven itself to be robust enough to power the KX3 for all three activations and still showed there LEDs on its battery-life indicator when Eric finished at Gauley River. 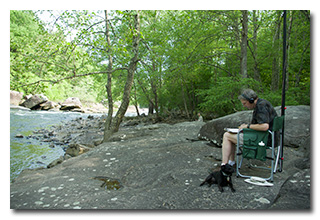 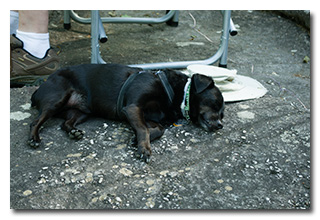 UPDATE: Read the report (and watch the video) by Thomas about his experience at Gauley River National Recreation Area: https://qrper.com/2022/07/pairing-the-elecraft-kx2-and-tuftein-random-wire-at-gauley-river-national-recreation-area/.

Thomas, Eric, and Miles all found the sound of the roaring water, and the sight of the moving water, to be mesmerizing. 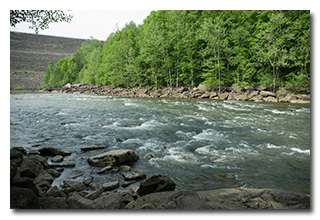 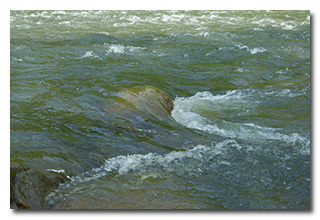 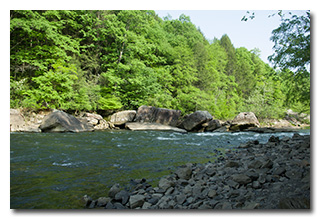 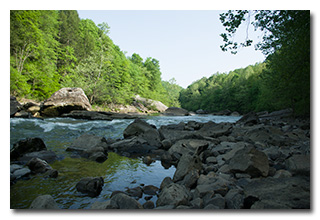 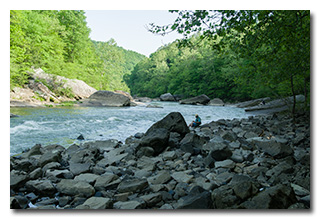 Fishermen look small against the river

A panoramic photograph: Eric as photographer, with Theo-dog; photo by Miles McFadden


After the activations were finished, the stations dismantled, and the gear stowed away, Thomas, Eric, Miles, and Theo hiked a short distance to see the dam and the the hydroelectric generation facility. 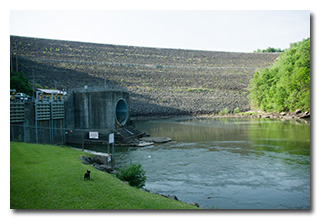 The dam and the hydroelectric generating station 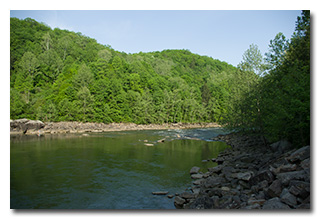 The placid (looking) waters at the hydroelectric generating station water-output