Located in southeastern Ohio, the 2,983-acre Lake Hope State Park is a natural paradise. The entire park lies within the 28,614-acre Zaleski State Forest in the valley of Big Sandy Run. It is a rugged, heavily forested region traversed by steep gorges and narrow ridges with remnants of abandoned mining and iron producing industries. This eye-catching scenery offers many opportunities for photographers, hikers and historians to enjoy. — from the park website 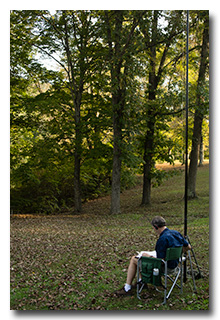 One member of the Southeast Ohio Radio Adventure Team participated in the 2018 running of the North Georgia QRP Club Peanut Power Sprint contest at Lake Hope State Park. Eric McFadden, WD8RIF, operated in the contest as Peanut #124 and he combined this operation with a WWFF/POTA activation of KFF/K-1968. Eric had chosen to operate at Lake Hope because his family was also there for a church potluck.

Eric arrived at the park about 2030 UTC, ninety minutes prior to the start of Peanut Power Sprint, so he could have an hour during which to work stations participating in the California QSO Party. Upon arrival, Eric scouted the picnic area, selected a suitable location, and set up his NPOTA-proven Enhanced KX3 Travel Kit with the 28½' end-fed wire antenna supported by an MFJ 33' mast. Eric was on the air by 2100 UTC.

Eric had hoped that the California QSO Party would give him the ten QSOs required for a valid Parks on the Air (POTA) activation of Lake Hope State Park but in just about 45 minutes he was able to make only two QSOs, both of which were on 15m. Many very strong Californians were heard on both 15m and 20m but, it seems, Eric's QRP signal was not being heard well on the west coast.

To his surprise, once the Peanut Power Sprint began at 2200 UTC, Eric found conditions on 40m to be good and he managed to make thirteen QSOs in just over an hour running a frequency on 40m. Eric did try 20m and 80m for short periods but no QSOs were made on either band.

After about an hour into the contest, QSOs dried up and Eric chose to end his participation and pack up the station before full darkness fell.

A highlight of the operation was working Hank, N8XX, in Michigan.

Two of the stations Eric worked gave the number "1" as their Peanut Number. Eric speculated that these operators weren't participants in the Peanut Power Sprint and thought the required number was a serial number.