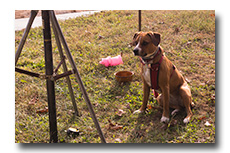 Eric McFadden, WD8RIF, participated in the 2017 running of the North Georgia QRP Club Peanut Power Sprint contest at Tom Jenkins Dam on Burr Oak Lake as Peanut #124. Eric was accompanied to the dam by his wife, Vickie, KC8MAJ, and their daughter's dog, Bo.

After a slightly late departure from Athens due to a sudden unavoidable conflict, Eric, Vickie, and Bo arrived at Tom Jenkins Dam about 2010 UTC, shortly after the start of the contest, finding the picnic shelter unoccupied. Eric quickly set up his NPOTA-proven Enhanced KX3 Travel Kit with the 28½' end-fed wire antenna supported by an MFJ 33' mast. Eric was on the air at 2020 UTC.

Band conditions on 20m excellent and Eric quickly made contacts on that band. Eric's first QSO came at 2022 UTC with AB9CA. Eric briefly checked 15m but found no activity there. He also checked 40m but found no Peanut Power Sprint activity there. Eric's seventeenth and final QSO came at 2118 UTC with K5BUI. All of Eric's QSOs were made on 20m and fourteen of the seventeen came as Eric ran a frequency.

An unexpected highlight of the operation for Eric was seeing a B-25 Mitchell WWII bomber fly over while he was tearing down the station. 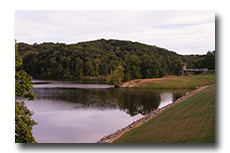 UPDATE: Upon later realizing that North Country National Scenic Trail counts for both World Wide Fauna & Flora in Amateur Radio (WWFF) and Parks on the Air (POTA), I submitted my log for this operation to both organizations.