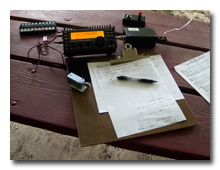 After a late departure from home due to uncharged batteries, Eric and Miles arrived at Highland Park about 2010Z. Parents with children were at the park but the picnic shelter was unoccupied so the station was set up within the shelter which proved to be a nice when rain started falling midway through the sprint.

Eric's plan had been test his one-piece, speaker-wire 44' doublet and his homebrew 1:1 air-core balun. He and Miles quickly erected the MFJ 33' mast but had to fight the tangled 44' doublet before they could raise the doublet to the top of the mast as an inverted-vee. The KX3's antenna tuner easily found a match on each of 20m and 40m for the 44' doublet and air-core balun. 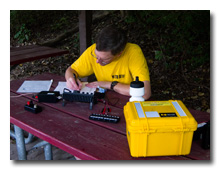 Band conditions on 20m and 40m were significantly better than Eric had experienced during the QRP Afield event just two weeks prior. Many Peanut Power Spring stations were heard first on 20m and later on 40m.

Eric started operating on 20m and his first QSO was with WV0H in Colorado at 2038Z. Over the next fifty minutes Eric worked another eight participating stations before switching to 40m to work another seven participating stations. Eric was able to run a frequency on each band for a short while. Stations were worked on 20m in Arizona, Colorado, Florida, Missouri, Texas, and Wyoming and on 40m in Georgia, Michigan, New York, North Carolina, and Pennsylvania. (In addition, just about halfway through the event, Eric switched the KX3 to 50.4MHz and, using the same antenna, participated in the ACARA's "5pm 6AM weekly net from the park.)

Eric was pleased with the performance of the single-piece, speaker-wire 44' doublet and the air-core 1:1 balun on 20m and 40m.