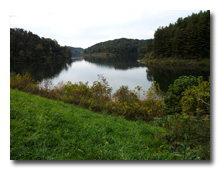 Eric's chosen operating location, the Dow Lake Dam, required a short hike up a well-worn gravel path. The view of Dow Lake from atop the earthen dam was lovely, and several nearby trees were suitable for supporting antennas. Because several hiking trails converged very near the chosen operating location, Eric was careful in hanging the antenna so that it wouldn't be inadvertently pulled down by a passing hiker or mountain-bike rider.

Eric's station consisted of his Elecraft K2 and his K2 Travel Kit. Eric had brought both the 44' broad-side doublet and the W3EDP antennas and, given the location of the best tree, chose to deploy the W3EDP end-fed wire antenna. The line to support the W3EDP was thrown over a branch using a half-filled disposal water bottle found on-site. Since weight was of little concern during this junket, Eric had brought his Vibroplex Vibrokeyer paddle to key the transceiver. Power was provided by the K2's internal 2.2Ah gel-cell. 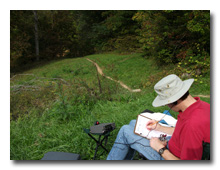 Eric had hoped to find a picnic table on or near the Dow Lake Dam but all the picnic tables were located near the parking lot, well below the top of the dam and very near the noise of the busy highway. Eric had brought along a three-legged camping stool to use as a table in case no picnic was available and pressed this stool into service as a table. This was Eric's first time operating the K2 without a genuine table. He found arrangement of K2 on the stool and Vibrokeyer on a clipboard to work well enough for this event although he had to be careful to not allow the W3EDP antenna to pull the stool over.

As can be seen in the log, below, Eric was about a half-hour late getting to the key. His first QSO was with Bob Patton, N4BP, in Florida who, as usual, produced a booming signal for most of the period of the event. Thereafter, stations were worked at a pretty good pace on 20m and 40m but no signals were heard on 15m the few times that band was checked. In all, Eric made twenty QSOs, of which six were the result of his calling CQ.