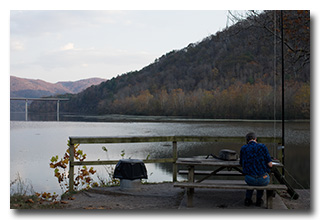 This operation was intended to be the third leg of the three-activation West Virginia Rivers RATpedition group-activations by the Southeast Ohio Radio Adventure Team. The original plan was for several SEORAT members to together travel to Gauley River National Recreation Area (RC09), New River Gorge National River (RV03), and Bluestone National Scenic River (WR02) over a weekend to perform activations. However, due to financial and time constraints, this plan fell through and Eric and Miles found themselves doing the RATpedition alone over what turned out to be a very long day-trip.

After the successful activation at New River Gorge National River, Eric and Miles made a 90-minute drive south to the Bluestone Park Road boat-ramp. As at the other activations in the West Virginia Rivers RATpedition, Eric had chosen this site based on the Google Maps images. Fortunately, the area turned out to be very good for a low-profile operation. After the very successful operation deep in the New River Gorge, where it proved tough to be get a 20m signal out but 40m was very productive, Eric was not worried about making enough QSOs to validate the QSO, particularly since the river gorge wasn't as severe at this point as at Fayette Station. Eric was concerned, though, about losing light, for the sun was already behind the hills to the west. Using the site's single picnic table Eric and Miles quickly set up the station and Eric was on the air by 2154 UTC. 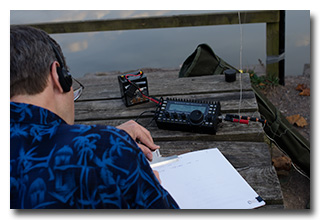 As at previous activations, Eric's station consisted of his Enhanced KX3 Travel Kit, his MFJ-1910 33' fiberglass telescoping mast, and a custom clipboard. For this activation, Eric strapped the 33' fiberglass mast to a handy post with duct tape instead of deploying his tripod.

Eric began operations on 20m and his first QSO came immediately at 2154 with WB0WQS. Five minutes passed until the second QSO but thereafter QSOs came briskly with the 19th QSO on 20m coming at 2216 UTC with N6HC. Eric then switched to 40m and the first QSO there came at K8RAT at 2220, who had been watching the Reverse Beacon Network for Eric to appear on 40m. QSOs on 40m came continuously until Eric's 40th and final QSO came at K4RUM at 2238 UTC.

During the operation, a young man from Charleston named Mikael arrived at the park was extremely intrigued by the amateur radio operation he was witnessing. Miles answered Mikael's questions and when he was able to, Eric disconnected the headphones from the KX3 so Mikael could hear the QSOs in progress. Afterwards, Mikael made a video of Eric sending Mikael's name in CW and made a note of the ARRL.org website.

Miles did not operate but helped with set-up and tear-down and did almost all of the activation photography.

Highlights of the activation were a QSO with fellow SEORAT-member K8RAT and a QSO with NL7V in Alaska.

After tearing down the station in the dark, Eric and Miles began the long drive back to southeastern Ohio.