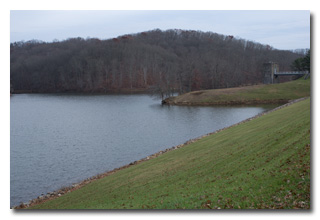 Eric arrived at the site at 1935 UTC and made proof-of-location photos of his GPS receiver and the North Country National Scenic Trail's trailhead sign, after which he quickly set up his station in the covered picnic shelter adjacent to the Trail.

As at previous activations, Eric's station consisted of his Enhanced KX3 Travel Kit, his MFJ-1910 33' fiberglass telescoping mast, and a custom clipboard. Because of trouble matching his antenna on 20m the previous day at activations of James A. Garfield NHS (NS39) and Cuyahoga Valley NP (NP14) Eric had built a new 28½' wire. Eric was happy to note that the KX3/KXAT3 was able to match the new wire on 20m. (Eric speculated that the old wire had gone intermittent within the insulation; he did measure that it had stretched some 3" since he had originally cut the antenna.) Eric was on-the-air by 1935 UTC.

Eric began operations on 40m with a quick park-to-park QSO at 1938 UTC with N2CX who was activating the Lyndon Baines Johnson Memorial Grove on the Potomac National Memorial (MN17) in the District of Columbia. Eric changed to 20m and his QSO there came at 1939 UTC with KA5T and a second came at at 1941 UTC with AC7P. After many minutes of fruitless calling, Eric switched to 40m and his first QSO there came at 1955 UTC with W0GXA. QSOs came slowly on 40m with Eric's 11th and final QSO coming at 2006 UTC with W4DRV. All QSOs were CW made at the 5-watt level.

The highlight of the operation was the aforementioned park-to-park QSO with N2CX.