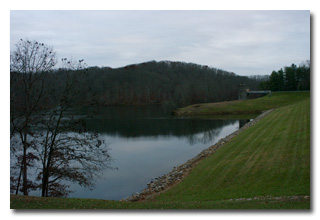 One member of the Southeast Ohio Radio Adventure Team succeeded in activating North Country National Scenic Trail as part of the ARRL's year-long National Parks on the Air (link). In what might have been his most frustrating and challenging activation to date, Eric McFadden, WD8RIF, traveled to Tom Jenkins Dam in Burr Oak State Park in Ohio to activate the North Country National Scenic Trail, TR04 (link), on a cold, blustery, overcast evening.

Eric arrived at the site at 2107 UTC and made proof-of-location photos of his GPS receiver and the North Country National Scenic Trail's trailhead sign. Perhaps as a sign that this activation was going to anything but easy, while carrying his gear from the car to the trailside picnic shelter, Eric managed to step in a large, fresh, pile of dog droppings. After a less-than-successful attempt to clean his shoe, Eric returned his attention to the activation and set up his station.

As at previous activations, Eric's station consisted of his Enhanced KX3 Travel Kit, his MFJ-1910 33' fiberglass telescoping mast, and a custom clipboard. Eric was on-the-air by 2125 UTC.

Eric began operations on 20m and his first QSO came immediately, at 2126 UTC, with AB7RW. Eric took this as a sign that the activation would be quick and painless but this was not to be. Eric managed three additional QSOs on 20m, with the last coming at 2131 UTC with KA3J. After a few minutes of fruitless calls of "CQ" on 20m, Eric switched to 40m where he called "CQ" for nearly twenty minutes before getting his first response. Eric's first QSO on 40m came at 2152 UTC with VE3DQN. Twelve minutes later, Eric changed back to 20m and spent several lonely minutes there before returning to 40m. Nearly an hour after his first QSO, Eric managed to make his 6th QSO on 40m and 10th QSO overall at 2222 UTC with W0IS who was activating Herbert Hoover National Historic Site, NS35. All QSOs were CW made at the 5-watt level.

The temperature was hovering about 42°F and by the time Eric was working his final QSOs, it was too dark for him to see his watch or the buttons on the KX3—and his fingers, despite being in gloves with chemical hand-warmers, were nearly numb.