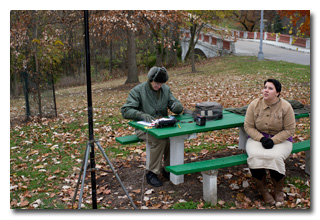 Upon arriving at the site, Eric and Miles quickly deployed Eric's station on a picnic table near the Buckeye Scenic Trail southern-terminus sign.

Eric's station consisted of his Enhanced KX3 Travel Kit and a custom clipboard. Eric was on-the-air by 1727 UTC.

Because it was CQ World Wide CW weekend, Eric began operations on 30m and his first QSO there came at 1734 UTC with WB2QJ. QSOs came steadily on 30m with Eric making his 5th 30m QSO at 1739 UTC with WA5LXS. Hank Greeb, N8XX, who was activating the nearby William Howard Taft NHS (NS78), had suggested he and Eric try to work each other on all the HF bands. Eric agreed, partially because he needed NS78 as a Chaser. Once Hank was set up, he phoned Eric and the fun began! Eric and Hank succeeded in making QSOs, in order, on 40m, 30m, 17m, 15m, 10m, 12m, and 80m. Strangely, signals were stronger on the higher frequencies than on 30m or 40m. Both Eric and Hank managed the 80m QSO with very high SWR—Eric's KX3/KXAT3 managed to find a 17:1 SWR match to the 28½' end-fed wire on 80m, and Hank's KX2/KXAT2 managed a similar poor match to his slightly longer end-fed wire. All QSOs were CW made at the 5-watt level.