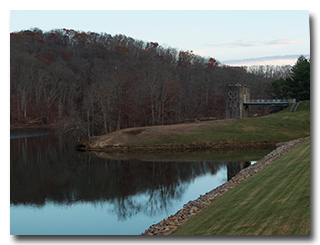 Eric arrived at the site at 2106 UTC and after making proof-of-location photos of his GPS receiver and the North Country National Scenic Trail's trailhead sign, Eric quickly set up his station in the picnic shelter immediately adjacent to the trail.

As at previous activations, Eric's station consisted of his Enhanced KX3 Travel Kit, his MFJ-1910 33' fiberglass telescoping mast, and a custom clipboard. Eric was on-the-air by 2123 UTC.

Highlights of the operation were the QSOs with K9FD in Hawaii, EA7LL in Spain, and CU3AA in the Azores, all three of which have answered Eric's CQ at previous activations. Indeed, over half of the stations Eric worked during this activation were stations he has worked multiple times at previous activations. Do these stations just like to help NPOTA Activators? Are they're trying to help the effort to reach the 1 million NPOTA QSO mark? Either way, Eric very much appreciates their support and looks forward to hearing their callsigns many more times this year.