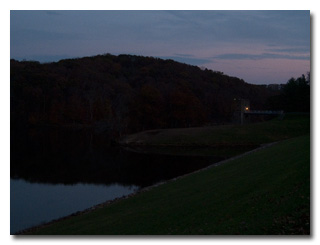 Eric arrived at the site about 2140 UTC and after making proof-of-location photos of his GPS receiver and the North Country National Scenic Trail's trailhead sign, Eric quickly set up his station in the picnic shelter immediately adjacent to the trail.

As at previous activations, Eric's station consisted of his Enhanced KX3 Travel Kit, his MFJ-1910 33' fiberglass telescoping mast, and a custom clipboard. Eric was on-the-air by 2153 UTC.

Given the unseasonably warm tempertures in the mid-70s, Eric had been concerned that Japanese Lady Beetles would again be swarming but, although a few beetles were seen, none bothered Eric or his operation at all.