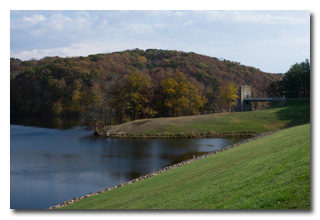 As at previous activations, Eric's station consisted of his Enhanced KX3 Travel Kit, his MFJ-1910 33' fiberglass telescoping mast, and a custom clipboard. Eric was on-the-air by 1818 UTC.

Just about the time Eric switched to 40m, a light rain began to fall but the roof of the picnic shelter kept Eric and his gear dry. The rain didn't last long.

As at Eric's October 19 activation at the same location (link, the picnic shelter and surrounding area was swarming with Japanese Lady Beetles. There were so many of them that at times Eric difficulty operating.