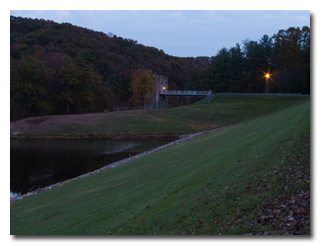 Eric arrived at the site about 2138 UTC and after making proof-of-location photos of his GPS receiver and the North Country National Scenic Trail's trailhead sign, he quicky set up his station in the picnic shelter immediately adjacent to the trail.

As at previous activations, Eric's station consisted of his Enhanced KX3 Travel Kit, his MFJ-1910 33' fiberglass telescoping mast, and a custom clipboard. Eric was on-the-air by 2154 UTC.

Eric began operations on 20m and his first QSO came at 2157 UTC with W6LEN. QSOs came quickly and steadily with Eric making his 16th 20m QSO at 2211 UTC with KH2TJ in California. Eric switched to 40m and his first QSO there was at 2218 UTC with VE3XN. Eric's 27th and final QSO of the evening came at 2231 UTC with N5KIP. All QSOs were CW made at the 5-watt level.

A hightlight of the operation was the QSO with W8KVK in Athens, Ohio, with his nice straight-key fist.

Earlier this summer, Eric had been concerned that the North Country National Scenic Trail, which at the time of this writing is the 2nd most-activated NPS unit with 275 activations and 10,705 QSOs, was "played out". This activation of NCNST and the activations of October 23 (link), October 22 (link), and October 19 (link) indicate that North Country National Scenic Trail is far being "played out". Perhaps, as the Centennial Year is drawing to a close, new NPOTA Chasers are becoming involved in the event.