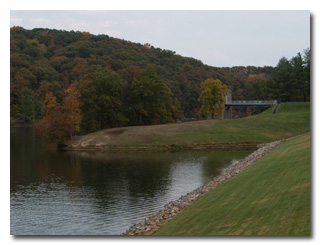 Eric arrived at the site about 2140 UTC and after making proof-of-location photos of his GPS receiver and the North Country National Scenic Trail's trailhead sign, Eric quicky set up his station in the picnic shelter immediately adjacent to the trail.

As at previous activations, Eric's station consisted of his Enhanced KX3 Travel Kit, his MFJ-1910 33' fiberglass telescoping mast, and a custom clipboard. Eric was on-the-air by 2150 UTC.

Eric began operations on 40m and his first QSO came at 2158 UTC with W4CZU. QSOs came steadily with Eric making his 10th QSO on 40m at 2216 UTC with W2CDO. Having validated the activation, and it not yet being dusk, Eric switched to 20m and his first QSO there came at 2218 UTC with KS7T. Eric made four more QSOs on 20m, his 15th and final QSO coming at 2224 UTC with W6MYN. All QSOs were CW made at the 5-watt level.

A hightlight (or, more precisely, a "low point") of the operation was the swarm of Japanese Lady Beetles at the site that and landed on Eric, on his gear, and on his logsheet.

After the operation was complete, Eric took a few minutes to snap a few more photos of the park before tearing down his station in the failing light.