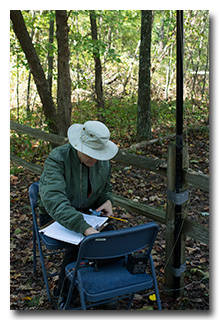 Two members of the Southeast Ohio Radio Adventure Team succeeded in activating North Country National Scenic Trail as part of the ARRL's year-long National Parks on the Air (link). Eric McFadden, WD8RIF, and Miles McFadden, KD8KNC, traveled to the fire tower in Tar Hollow State Park in Ohio to activate the North Country National Scenic Trail, TR04 (link). They were accompanied by Eric's wife Vickie, KC8MAJ, who did not participate in the operation.

The trio arrived at the site about 1620 UTC and after getting a photograph of Eric with the North Country National Scenic Trail's trailhead sign, Eric and Miles quicky set up Eric's station.

As at previous activations, Eric's station consisted of his Enhanced KX3 Travel Kit, his MFJ-1910 33' fiberglass telescoping mast, and a custom clipboard. In a change from most activations, Eric didn't use his tripod to support his 33' mast but strapped it to a fence-post using duct tape. Eric was on-the-air by 1638 UTC.

Eric began operations on 40m and his first QSO came at 1640 UTC with WA8REI. QSOs came steadily and quickly with Eric making his 10th QSO on 40m at 1655 UTC with N9UUI. Eric switched to 20m and his first QSO there came at 1701 UTC with K5LH. Eric made two more QSOs on 20m before being forced from the frequency by a many-minutes-duration solid carrier. Having met the requirements for validating the activation, and wishing to have the time to climb the fire tower, Eric chose to cease operations at that tim. Eric's 13th and final QSO was with KX5M at 1703 UTC. All QSOs were CW made at the 5-watt level.