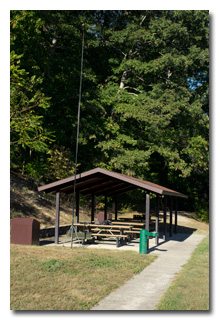 Eric arrived at Tom Jenkins Dam about 2000 UTC. Upon arrival, he found a wedding reception in progress. Fortunately, the wedding reception, while loud with celebratory spirit, was in the separate picnic area and was not using the covered picnic shelther Eric had planned to use. Despite arriving right at his announced on-the-air time, Eric first walked the length of the dam to the location of the previous week's operation (link) to see if he could find the KX3 power cable he had unknowingly dropped; alas, he didn't find the power cable.

Eric's station consisted of his Enhanced KX3 Travel Kit, his MFJ-1910 33' fiberglass telescoping mast and tripod, and a custom clipboard. Back at the picnic shelter, Eric quickly erected the 33' mast and used it to support his newly-made 28½' end-fed wire antenna with three new 17' counterpoise wires. The KX3 station was deployed just as quickly and Eric was on-the-air by about 2023 UTC. 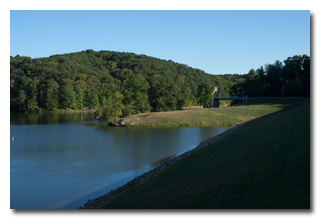 Eric began operations on 40m CW and his first QSO was at 2026 UTC with N4TMM". After six QSOs, Eric was forced to QSY from his frequency when another operation rose up out of the noise. (Eric later learned that he was hearing the pile-up from the first-ever activation of the brand-new NPS unit, Natural Bridge Affiliated Area, AA26.) Eric made eleven QSOs on 40m before switching to 20m, where his first and only QSO was with K7NEW, who had been calling CQ, at 2056 UTC. Eric CQs went unanswered and Eric found no Peanut Power Sprint activity on the band. Returning to 40m, Eric made three more QSOs, with his 15th and final QSO being a short ragchew with VE6OU at 2127 UTC. All of Eric's QSOs were made at the 5-watt level.

At least nine of Eric's 15 QSOs were with stations participating in the Peanut Power Sprint. Eric may well have had trouble successfully validating this activation of TR04 had he had to rely soley on NPOTA chasers.