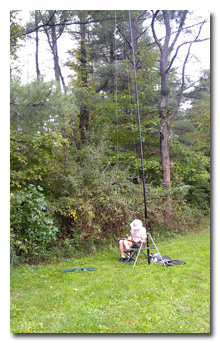 Eric, Kate, and Bo arrived at Tom Jenkins Dam about 1745 UTC. Upon arrival, they found the picnic shelter to be occupied by a group celebrating a birthday. The picnic shelter being unavailable, Eric scouted around a bit and finally decided to operate directly on the trail beyond the far end of the dam. Kate helped Eric carry some of his gear over the 1/4-mile long dam.

Eric's station consisted of his Enhanced KX3 Travel Kit, his MFJ-1910 33' fiberglass telescoping mast and tripod, and a custom clipboard. Eric quickly erected the 33' mast and used it to support his 28' end-fed wire antenna with three counterpoise wires. The KX3 station was deployed just as quickly and Eric was on-the-air by about 1811 UTC.

Eric began operations on 40m and his first QSO was at 1812 UTC with VE3PA who was very near Eric's announced frequency calling "CQ". After a short ragchew with Bill, Eric tuned down a little bit and began making his own calls of "CQ QRPAF" and "CQ NPOTA". During his third and fourth QSOs, Eric experienced trouble with his keying; Eric was able to complete these QSOs by using this American Morse Equipment "Mini B" paddle as a straight key before discovering that problem was actually not the key but the audio extension cable Eric was using with the key. With the extension cable removed, keying was again perfect.

QSOs were slow in coming. Band conditions on 40m were weird, with very deep and very fast fading. Eric heard no other stations calling CQ for the QRP Afield contest although he several of the stations he worked did send the full QRP Afield exchange. Unlike at other recent activations of TR04, at no time did Eric despair of making his ten QSOs although he was concerned that a storm might arrive before he could validate his activation. However, success was achieved and Eric made his tenth and final QSO was with NI9Y/QRP at 1852 UTC. After making his 10th QSO on 40m, Eric tried to switch to 20m to see if more QRP Afield activity could be found there but found that for some reason the KXAT3 internal antenna tuner in the KX3 transceiver refused to match the 28' end-fed wire on 20m, this despite Eric having used the identical antenna and rig on 20m numerous times. All QSOs were made at the 5-watt level.

Kate did not operate but helped carry gear, did all the activation photography, and kept her dig Bo occupied.

Upon returning to the car, Eric found the picnic shelter to be unoccupied andm the weather still being cooperative, he quickly re-deployed the mast and 28' end-fed wire with three counterpoise wire to test it; as it had each time before at this location, the KXAT3 ATU was able to quickly match the wire on 20m. What had happened at the operating location? Had the antenna been detuned by the nearby pine tree? Had the damp, loamy soil at the operating location changed the ground-characteristics enough to prevent a match? More likely, it's possible there was an intermittent break in the 28' wire very near the 20m 1/2-wave point and the break was closed during the test at the picnic shelter and again later at home when Eric checked it with a continuity tester. Eric resolved to make a new antenna before his activation of Perry's Victory and International Peace Museum (NM20) on South Bass Island the following weekend.