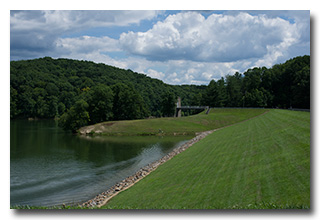 Eric had decided at the last minute to do the activation and participate in SYBO and arrived at Tom Jenkins Dam about 1730 UTC, ninety minutes after the start of SYBO. Upon arrival, Eric found the picnic shelter to be occupied by a Chinese family who graciously allowed Eric to use the his usual picnic table for the operation.

Eric's station consisted of his Enhanced KX3 Travel Kit, his MFJ-1910 33' fiberglass telescoping mast and tripod, and a custom clipboard. Eric quickly erected the 33' mast and used it to support his 28' end-fed wire antenna with three counterpoise wires. The KX3 station was deployed just as quickly and Eric was on-the-air by about 1742 UTC.

Eric began operations on 40m and his first QSO was at 1743 UTC with AI4SV who was on Eric's announced frequency calling "CQ SOTA". During this QSO, Eric discovered that his American Morse Equipment "Mini B" paddle was malfunctioning; he opened the key but was unable to determine why the "dash" circuit wasn't working. Eric had brought no emergency back-up key but was able to use the working half of the Mini B as a straight key for the rest of the operation.

Because his announced frequency was occupied by AI4SV, Eric moved up-frequency a bit and began making his own calls of CQ. Eric called CQ for about half an hour before making a second QSO, with KD8DEU, at 1817 UTC. It took an additional ten minutes of calling before a third QSO, then QSOs four, five, and six came relatively quickly. After several more minutes of unproductive calling, Eric switched to 20m where he worked K6HPX at 1854 UTC after, which he slowly netted QSOs until his twelfth and final QSO with NJ2F at 1908 UTC. All QSOs were made at the 5-watt level.

For about the first hour of the operation, Eric had serious doubts about being able to validate the activation but upon making his second QSO on 20m, the seventh overall, he was gained confidence that he would be able to pull off a successful activation.

The solar K-index was at "2" for Eric's operation; this almost certainly had a negative impact on the condition of the bands and helped make the operation difficult. On the other hand, the Reverse Beacon Network heard many dozens of Eric's CQ calls, on both 20m and 40m, and at points all over the U.S. and Canada, so Eric's QRP signal was getting out well.

Eric heard absolutely no one working SYBO on either band and none of the stations Eric worked offered the SYBO exchange.

The weather was beautiful for an outdoor operation. The temperature was about 80° and the sky was deep blue with puffy clouds.