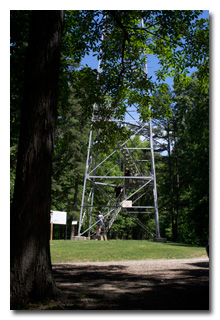 One member of the Southeast Ohio Radio Adventure Team was joined by a friend and new NPOTA-Activator for an activation of North Country National Scenic Trail as part of the ARRL's year-long National Parks on the Air (link). Eric McFadden, WD8RIF, and Robert Riordan, KA4VNK, traveled to the fire tower in Tar Hollow State Park to activate the North Country National Scenic Trail, TR04 (link).

Eric and Robert arrived at the site about 1430 UTC and after photographing themselves at the North Country National Scenic Trail's trailhead sign, quicky set up their stations.

Eric's station was his now-standard NPOTA station: his Enhanced KX3 Travel Kit, his MFJ-1910 33' fiberglass telescoping mast, and a custom clipboard. In a change from most activations, Eric didn't use his tripod to support his 33' mast but strapped it to a fence-post using duct tape. Eric was on-the-air by 1521 UTC.

Robert has been licensed for several decades but has been inactive on HF for over thirty years. He has a growing interest in doing HF field operations and used this activation to try out his recently-purchased Ten-Tec Argonaut V transceiver, LDG Z-817 ATU, and W4KGH 80m-10m end-fed antenna in the field. Robert was quickly successful in throwing a line over a nice tree-branch using a tennis ball and pulled his end-fed antenna up. Although the instructions provided by W4KGH indicate a counterpoise wire is not usually needed, Robert deployed his antenna with a counterpoise wire. He found that the LDG Z-817 ATU easily matched the W4KGH end-fed on 20m but the LEDs insisted on generating an undocumented series of blinks when he attempted to match the antenna on 40m.

Eric operated primarily CW on 40m and his first QSO was with N4EX at 1524 UTC. Propagation was still suffering from a CME-event the day before so QSOs were slow in coming but Eric managed to make an additional nine QSOs over the next twenty-one minutes. His final CW QSO was with fellow SEORAT member K8RAT at 1545 UTC. Eric switched to 20m SSB to check on Robert's transmit audio and helped Robert by making a SSB QSO with him at 1546 UTC. All CW QSOs were made at the 5-watt level; the single SSB QSO was made at the 1/2-watt level. 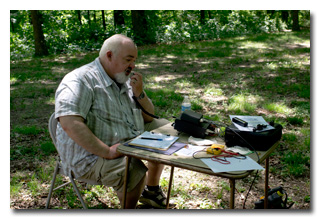 Robert had a great deal of difficulty in making QRP SSB QSOs but did manage to make the ten QSOs required to validate his activation. After Robert received reports of RF in his transmit audion, he and Eric later determined that his Ten-Tec hand-mic might have a broken shield in the cable—poor transmit audio certainly wouldn't have helped Robert make QRO SSB QSOs during already poor propagation conditions!

The weather was excellent for an outdoor operation in a forest. Despite the recording-breaking temperature in the low-90s, the shade provided by the trees and the nice breeze kept Eric and Robert quite comfortable. The cicadas of Brood V of the 17-year cicadas were still audible but not overwhelmingly so.