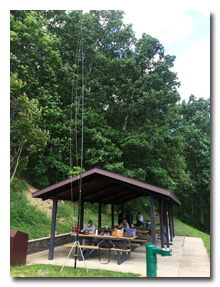 Everyone had arrived at the site by about 1845 UTC. Because of a threatening weather forecast, the group decided to set up the stations in the picnic shelter, which they were happy to find was unoccupied and available. Andy set up his Kenwood TS-480SAT transceiver with a 10m-40m trap-dipole, with power provided by John's 1kW Honda inverter-generator. Eric set up his station which consisted of his Enhanced KX3 Travel Kit, his MFJ-1910 33' fiberglass telescoping mast, and a custom clipboard. After Eric made his required number of QSOs, he surrendered his antenna to Carl, who set up his new ICOM IC-7300 with power provided by Eric's 2kW Honda inverter-generator.

With the solar K-index at "5", expectations were low and at least one operator initially had concerns about being able to make enough QSOs to qualify for a valid activation. However, all who chose to operate made at least the required ten QSOs. 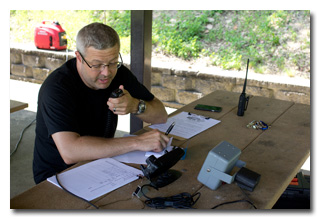 Eric began operations at 1912 UTC on 20m and his first QSO was with K0FD at 1918 UTC. Eric's eighth and final CW QSO was with WA5FWC at 1933 UTC. Eric then made a SSB QSO on 40m with KD8FRQ at 1943 and a SSB QSO with N8VZ on 20m at 2015 UTC. All QSOs but the last were made at the 5-watt level; the final QSO was made at a 1-watt level. During this operation, Eric found it harder to make QSOs than the previous day with the same station—perhaps due to the high K-index? Also, unlike during the previous day's operation, his KX3's receiver was bothered significantly by Andy's 100-watt Kenwood transmitting on the other band. Eric had brought 20m and 40m bandpass filters for use on the two 100-watt SSB stations but hadn't thought to bring the proper adapter to allow him to use the 40m bandpass filter with his KX3. 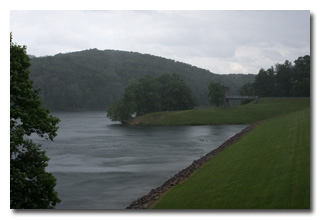 Bob Curtis began operations almost as soon as Andy finished. Bob worked only 40m SSB. His first QSO was with K0FD at 1928 UTC and his 11th and final QSO was with KD2FPW at 1947 UTC.

Once Eric gave up his antenna, Carl set up his new IC-7300 and began operations on 20m SSB. Bcause of concerns about running 100 watts into Eric's 28' end-fed wire antenna, Carl set his power at about 30 watts. Carl's first QSO was with KC0ZNI at 1957 UTC and his last QSO on 20m was with FY5HB at 2021 UTC. Carl switched at 40m and worked K2DBK at 2032 UTC. Carl's thirteenth and final QSO was with WZ4K at 2039 UTC. Somewhere during his operation, Carl switched from Eric's simple 28' end-fed antenna to the 10m-40m trap dipole.

Fortunatetly, the rain stayed away long enough for all those who wanted to could make valid activations and didn't start until tear-down was nearly complete.