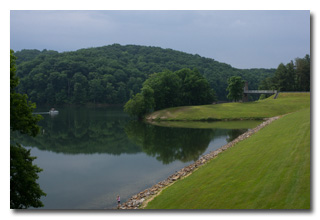 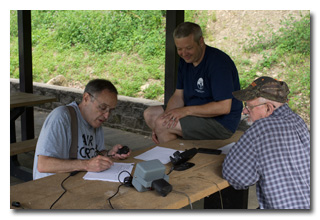 John, Eric, Miles and Andy arrived at the site by 1230 UTC and Bob arrived shortly thereafter. Because of threatening weather, the group decided to set up the stations in the picnic shelter, which they were happy to find was available. The plan had initially been to set up two 100-watt SSB stations and one QRP CW station but because of the small number of operators and the threatening weather, the group decided to set up a single 100-watt SSB station and the QRP CW station. While Miles, Andy, and John worked to hang a 10m-40m trap-dipole from a tree, Eric quicky set up his station which consisted of his Enhanced KX3 Travel Kit, his MFJ-1910 33' fiberglass telescoping mast, and a custom clipboard and commenced operations on 20m at about 1335 UTC. 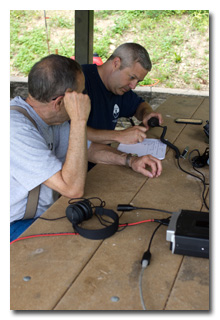 While Miles, Andy, and John worked to hang a 10m-40m trap-dipole from a tree and set up the 100-watt SSB station, Eric quicky set up his QRP CW station which consisted of his Enhanced KX3 Travel Kit, his MFJ-1910 33' fiberglass telescoping mast, and a custom clipboard. Eric commenced operations on 20m at about 1335 UTC. Eric's first QSO was with NS7E at 1339 UTC and his final QSO running the frequency was with YV5OIE at 1406 UTC. Later, Eric tuned around a bit for other activations and made a QSO with WW2DD at 1521 UTC. All Eric's QSOs were made at the 5-watt level.

The 100-watt SSB station consisted of Andy's Kenwood TS-480SAT and a 10m-40m trap-dipole. Power for the SSB station was provided by John's quiet Honda inverter-generator.

Andy was the first to operate the SSB station and he chose to operate on 40m. His first QSO was with W3OK at 1400 UTC and his final QSO was with N2YNF at 1420 UTC. Andy's first two QSOs were hunt-and-pounce; the rest were made with Andy running the frequency. Overall, Andy made fourteen QSOs.

Andy and John did a little bit of swap-the-mic. John's first QSO was with W2JW at 1415 UTC and his second QSO was with W4LK at 1417 UTC. After recording his own "CQ" call in the Kenwood's voice-keyer, John began his own run on the frequency. He stayed on 40m and made a QSO with K3JPT at 1420 UTC; his final QSO was with AE1T at 1435 UTC. Overall, John made ten QSOs. 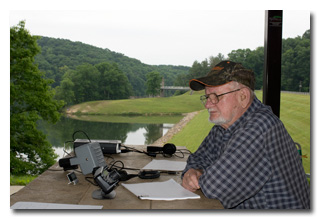 Miles didn't operate but helped with set-up and tear-down and did much of the photography of the operations.

Although the weather had been threatening, other than some very light rain during set-up, no real rain fell during the operation and the expected thunderstorm never arrived. Just to be safe, Andy monitored lightning-strikes on his smartphone and the group was ready power power down the stations and disconnect the antennas had lightning gotten too close to Tom Jenkins Dam.

All participants at this operation confirmed plans to do it again the following day.