Eric waited to be sure of the weather and arrived at Tom Jenkins Dam later than planned at 1540 UTC and, fortunately, the picnic shelter was available for his use.

Eric's station consisted of his Enhanced KX3 Travel Kit, his MFJ-1910 33' fiberglass telescoping mast and tripod, and a custom clipboard. Eric quickly erected the 33' mast and used it to support his 28' end-fed wire antenna with three counterpoise wires. The KX3 station was deployed just as quickly and Eric was on-the-air by about 1600 UTC.

This was Eric's first activation where he seriously thought he'd fail to make the ten QSOs required to validate the activation. Ted Jacobson, W8KVK, was instrumental in preventing this from happening by carefully noting Eric's band-changes from his home QTH and posting spots to the network. His final spot, "NPOTA TR04 Needs 4 more Q's, pse" saved the day for Eric by bringing him five more QSOs. 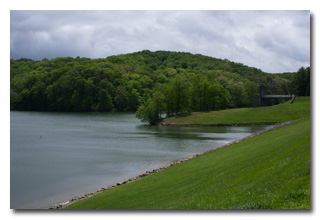 The weather was lousy for an outdoor operation. As mentioned above, several hours of rain had finally stopped just prior to the start of the activation. The temperature climbed to just about 50° but the winds gusted to 26mph. On the other hand, the remaining dark clouds and the occasional sun peaking through made for dramatic and interesting views. In addition, swallows were barnstorming over the area and a family of geese with about a dozen goslings were grazing in the grassy side of the dam so Eric had plenty to look at while his KX3's memory keyer sent "CQ CQ NPOTA de WD8RIF K" over and over.

Eric had so much trouble validating this activation at NCNST that he canceled his planned activation there the following day, wondering if there's now so little demand for this NPS unit on CW that all subsequent activations of the unit will be challenging.