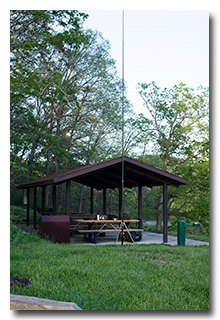 One member of the Southeast Ohio Radio Adventure Team succeeded in activating North Country National Scenic Trail as part of the ARRL's year-long National Parks on the Air (link). Eric McFadden, WD8RIF, traveled to Tom Jenkins Dam in Burr Oak State Park to activate the North Country National Scenic Trail, TR04 (link). He was accompanied by inveterate NPOTA-chaser, Ted Jacobson, W8KVK, and by Eric's daughter's puppy, Bo. (At the time of this writing, Ted is ranked #5 among Ohio NPOTA Chasers.)

Eric's station consisted of his Enhanced KX3 Travel Kit, his MFJ-1910 33' fiberglass telescoping mast and tripod, and a custom clipboard. Eric quickly erected the 33' mast and used it to support his 28' end-fed wire antenna with three counterpoise wires. The KX3 station was deployed just as quickly and Eric was on-the-air by about 2309 UTC.

Eric started operations on 20m. His first QSO was with N1CC at 2314 UTC. QSOs came steadily until Eric's tenth and final QSO with AD6HF at 2325 UTC. Hoping to make a few additional QSOs, Eric switched first to 40m and then to 30m but no responses to his CQs were heard on either band. All QSOs were made at the 5-watt level.

While Eric was operating, Ted walked Bo over much of the Tom Jenkins Dam area. Bo seemed to like the attention.