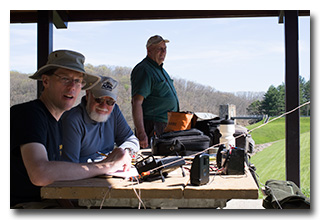 Eric, Miles, Tom, and Malcolm arrived at Tom Jenkins Dam about 1930 UTC. Mike had arrived about half an hour earlier.

Eric's station consisted of his Enhanced KX3 Travel Kit, his MFJ-1910 33' fiberglass telescoping mast and tripod, and a custom clipboard. Upon arriving at the site, Eric erected the 33' mast and used it to support his 28' end-fed wire antenna with three radial wires, after which he deployed the KX3 station. Eric was ready to be on the air about 1950 UTC.

Eric started on 40m and his first QSO was with K0BAK at 1955 UTC. After his fifth QSO, Eric switched to 20m. His eleventh and final QSO was with KP4ED, Luis in Puerto Rico, at 2025 UTC. All QSOs were made at the 5-watt level.

As at previous activations at this location, Eric was astounded at how low the noise-floor was on 40m. Many of the stations Eric worked were fairly weak but because of the low noise level, he had no trouble copying even the weakest of the stations. Eric also noticed that it is getting harder to make NPOTA QSOs at North Country National Scenic Trailmdash;at the time of this writing, TR04 has been activated 55 times and can no longer be considered to be a rare unit anymore.