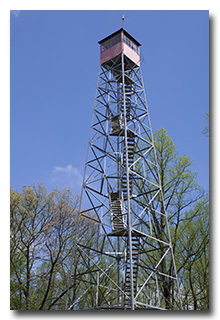 The trio arrived at the fire tower about 1545 UTC, a little bit later than Eric had hoped. After finding the NCNST trail-head and taking photos, they found a friendly tree-branch with level ground beneath it.

The HF station consisted of Eric's Enhanced Travel Kit. Eric had brought his 33' fiberglass mast and tripod but after finding the ready presence of a nice tree-branch, Eric decided not to deploy the mast.

Miles was elected to hang the antenna; his second attempt easily placed the string through the tree and Miles pulled up the 28' end-fed wire antenna and deployed the three counterpoise wires while Eric set up his KX3.

Because Mike was unfamiliar with the KX3, Eric elected to operate first. His first QSO with N3SW operating from the Appalachian Trail (TR01) at 1608 UTC. This was followed by a QSO with K4BX operating along the Natchez Trace National Parkway. Eric finished with his thirteenth and final QSO with AG4EP at 1638 UTC. All of Eric's QSOs were made on 40m CW and all were at the 5-watt level. 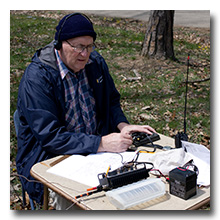 Eric gave Mike a quick tour of the KX3 and Mike then began his participation in QRP to the Field and his attempt at a first NPOTA activation. Mike's first QSO was with AD9CD at 1657 UTC. Mike's fifteenth and final QSO was with W2NO at 1805 UTC. Mike's first QSO was on 20m; all subsequent QSOs were on 40m. All of Mike's QSOs were made at the 5-watt level. Having (mostly) given up electronic keyers, Mike keyed cootie-style with his Begali HST Single-Lever paddle.

Once Mike seemed comfortable with the KX3, Eric quickly put together his ELK 2M/440L5 log-periodic antenna and he and Miles climbed to the top of the fire tower to participate in the Ohio 2 Meter FM Simplex Squares Contest using a Yaesu FT-60R HT and the ELK antenna. Eric started but he and Miles took turns working each of the stations they could reach.

Eric's first QSO with NS8O in EM89UD at 1705 UTC. Eric could hear WT8E in Athens quite well but Walt never did hear Eric. Eric's second QSO was with KD8ZCH in EM89NN at 1720. Eric's third QSO with with W8KVK in EM89WI; Ted was a true "portable", and was running five watts into a backpackers five-element yagi. (Eric and Ted had several follow-on exchanges but Eric logged only the first one for purposes of the contest.) Eric made a quick QSO with K8RAT who was in EM89OJ—at the base of the fire tower—at 1739. Eric's fifth and final QSO was with KD8WVX at an unknown local at 1801 UTC. Andy had hoped to join Eric, Miles, and Mike in Tar Hollow but circumstances prevented this; instead, Andy drove from The Plains toward Tar Hollow until he was able to work Eric. For all of Eric's QSOs, Eric maintained his own log while Miles supported the ELK log-periodic antenna on the end of a five-foot PVC pipe; the best results were achieved when Miles extended the antenna outside of the tower structure on the pipe. Eric operated only on 146.52 MHz with the HT set at 5-watts output. 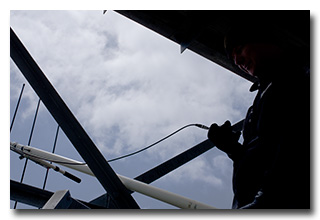 Miles made three QSOs during the Ohio 2 Meter FM Simplex Squares Contest. His first QSO was with NS8O at EM89UD at 1708 UTC. His second QSO was with KD8ZCH at EM89NN at 1725 UTC. His third and final QSO was with W8KVK in EM89WI at 1728 UTC. For all of his QSOs, Miles supported the antenna with one hand and the HT with the other while Eric maintained Miles's log. Miles operated only on 146.52 MHz with the HT set at 5-watts output.

This was Eric's first trip to the fire tower at Tar Hollow State Park; he thinks this might be worth considering for future activations of North Country National Scenic Trail.

UPDATE: QRP to the Field 2016 Results