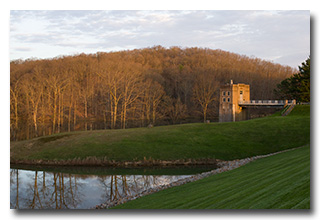 Eric arrived at Tom Jenkins Dam about 2255 UTC, about fifteen minutes later than he had hoped to arrive, and was happy to find the picnic shelter was unoccupied.

Eric's station consisted of his Enhanced KX3 Travel Kit, his MFJ-1910 33' fiberglass telescoping mast and tripod, and a custom clipboard. Eric was concerned about losing daylight before tear-down and he very quickly erected the 33' mast and used it to support his 28' end-fed wire antenna with three radial wires. The KX3 station was deployed just as quickly. Eric was on-the-air at 2310 UTC.

Eric hadn't previously done an NPOTA activation this late in the day and had been concerned the bands might not cooperate. However, his fears proved groundless. Eric's first QSO was with AI8F at 2312 UTC after just a few calls of CQ. Thereafter, QSOs came steadily until Eric's fourteenth and last QSO with AC5O at 2328 UTC. All QSOs were made on 40m CW and all were at the 5-watt level.

As at previous activations at this location, Eric was astounded at how low the noise-floor was on 40m. Many of the stations Eric worked were fairly weak but because of the low noise level, he had no trouble copying even the weakest of the stations.

The weather was perfect for this activation: sunny, 77°, and with a very slight breeze.